Written by: Luis Buñuel, Hugo Butler and (based on the novel “Robinson Crusoe”) Daniel Defoe

Spanish director Luis Buñuel was regarded as one of the screen’s great surrealist. His films mixed social commentary with his disapproval of religion. Yet after making films such as Un Chien Andalou with Salvadore Dali (including the infamous slicing of a woman’s eyeball) and L’Age d’Or, Buñuel built up a reputation as a film maker who could travel on flights of fancy while shocking his audience.

So after his self-inflicted exile from Spain after the Civil War, Buñuel found himself in Mexico. With American financing, he made his one and only film for the States and it would be his most ordinary, a retelling of the classic Robinson Crusoe. Yet as ordinary as it was, it was also extraordinary.

Robinson Crusoe, a British aristocrat, survives a ship wreck, finding himself on a deserted island with just a few belongings from the stricken craft, a dog and a cat and a bible. Over the years, Crusoe faces the elements, the absolute loneliness with his own thoughts as his company. That is until one day, he witnesses a tribe on the other side of the island preparing to kill one of their own.

Buñuel’s vision of Wuthering Heights two years before was a retelling that had virtually nothing to do with Emily Bronte’s original text. So it’s surprising that he stayed so faithful to Defoe’s story. Apart from a scene in which Crusoe, in a dream, is speaking to his father while he scrubs a pig clean, the film uses nothing more than Crusoe’s voice over and the man as he tries to battle with his own sense of isolation.

With a glorious palate of colour, the film is a lush, visual treat, even though three-quarters are just Crusoe, roaming the beach and woodlands that surround his now permanent home. With the use of the limited setting and even smaller cast, Buñuel manages to keep things interesting. We watch and we listen to man who obviously made mistakes in his life and is having to change. 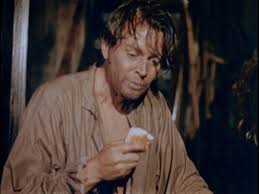 Buñuel’s atheist opinions still hold true, even though Crusoe uses the bible not only as part of his salvation but as a way to converse with himself, most notably during a scene in which he heads to a cavern to shout a passage, waiting for an echo. Yet a whole scene is devoted to Crusoe and his new-found companion, Friday, discussing about the existence of God.

Irish actor Dan O’Herlihy, who most will remember for his portrayal of the evil mask maker in Halloween III: Season Of The Witch, is a perfect Crusoe. Completely unsympathetic, his deep, dark vocal tones make for a more intriguing narration. It’s a towering performance that led to O’Herlihy receiving an Oscar nomination.

Crusoe is entirely lacking in sentimentality. In fact, this is a straight forward telling of a classic tale that captures the moods and tone of the book brilliantly. Brutal in places (especially for 1954) completely engrossing throughout, this is Buñuel’s at his most restraint. If you are looking for a typical film by the Spanish director, best look elsewhere but do still pay this a visit. You won’t be disappointed.