On paper, The Birdcage should not work. A remake of a hugely successful French comedy farce, written by a woman who hadn’t written anything since the disastrous Ishtar in 1987, with a lead, more known for his manic humour who is playing it straight (?) and handing over the big laughs to his co-star and finally having the film set in the world of a drag club run by a homosexual couple. No one expected it to be as big a hit as it was, thanks to a very funny script, brilliantly staged comic scenes and leads who throw their heart and soul into the whole bizarre thing. 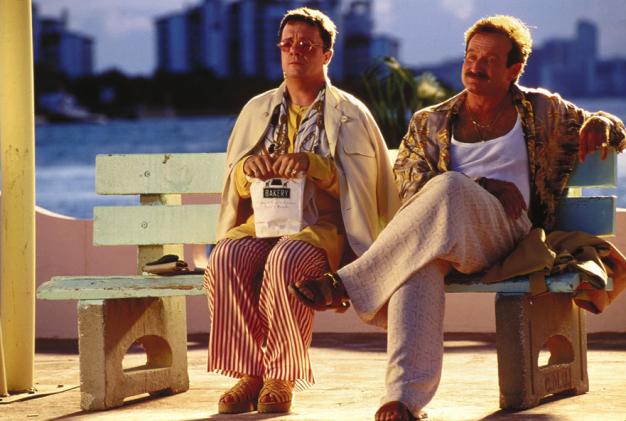 Armand Goldman runs the most popular nightspot in South Miami Beach, The Birdcage, along with his emotionally unbalanced partner, Albert. Armand had a son in a mistaken night of passion and he and Albert have raised him as their own. Val, their son, has an announcement. He’s getting married to Barbara, who just so happens to be the daughter to Senator Kevin Keeley, a moralistic politician who wants to bring back normal family values. Val has another announcement. They are coming to South Beach to meet his family.

Mike Nichols’ film is a wondrous mix of stereotypes and people playing against type. It has the tone of pure joy running throughout and while the farcical feel that made the original so popular may have been removed, it still manages to stamp its own personality on the proceedings, even if it doesn’t lose the sensibilities of Frances Veber’s version.

The comedy comes thick and fast. From the opening moments when we first meet Armand and his partner, the overly effeminate, Albert, refusing to go on stage because he is getting old, you know exactly where the jokes will be coming from. It manages to do something miraculous and that is not to ridicule the gay community, which it could quite easily have done.

Would the film have worked half as well if Nichols hadn’t got the cast he wanted? Originally it was intended as a vehicle for Steve Martin and Robin Williams, with Martin as Armand and Williams as Albert. Alas, due to conflict in schedules, Martin had to pull out, leaving Williams partnerless. He decided not to play the lavish, over-the-top Albert, plumping for the more subdued Armand, leading to the casting of Broadway star, Nathan Lane, in his first big Hollywood feature. A decision that works wonders.

Williams always had the knack of managing to restrain himself when needed and let loose when he had to. The choreography sequence is pure Williams, with the great man showing his ability for impersonation, even in the field of dance. However, it is Lane who almost walks away with the film as the larger-than-life Albert, a man who is more comfortable in women’s clothes and who cannot pull off being straight. It is the physical comedy that Lane excels.

It was noted that Nichols had to direct from under a sound blanket because he kept laughing so much and he demanded both Williams and Lane to do at least one shot that was script-based before allowing them to improvise, which they both were experts in (most of the shots you see are ad-libbed). In fact, one sequence, when Williams slips over, was an accident kept in the final film and if you look closely, you can see the cast trying not to laugh.

As I said before, this is a film about people playing against type and who would have thought that Gene Hackman would be a natural in comedy. His senator is hilarious, all straight and stuffy, yet completely bemused by the happenings in the Goldmans (or is it Coldmans) household. Let’s not forget the biggest surprise coming during the outrageous finale. (If you haven’t seen it< I won’t give the game away but it is priceless).

Dianne Wiest is always good value and as the young couple (although they were a lot older than their characters) Dan Futterman (who worked with Williams before as a punk in The Fisher King) and Clarista Flockhart make for agreeable pairing. I did say Lane almost stole the film but some of the biggest laughs come from Hank Azaria man-servant, the extravagant Agador. With his strange accent and his inability to wear shoes, it’s a masterclass in upstaging a room full of giants.

The Birdcage is a big, fat, joyful belly laugh and it’s credit to all who were involved, to take something and give it a unique touch. It has managed to stand the test of time and I think deserves a lot more attention than it gets. It made me laugh the first time I saw it and it still makes me laugh just as much now.