Written by: David T. Chantler and (based on the novel) H. Rider Haggard

In between making some of the finest horror films around, Hammer would try to attract a larger audience by making epic adventures. Their most famous has to be the prehistoric One Million Years BC. She follows those same grounds. Based on a famous adventure novel by King Solomon’s Mines author, H.Rider Haggard, this gave former Bond girl, Ursula Andress a starring role. Unfortunately, for all its pomp and lavish production values, it’s as dull as dishwater.

Having served time in the military in the Middle East, British archaeologist Holly, his valet, Job and friend, Leo ponder what to do with their time now they are free. Holly has always dreamed of finding the hidden city of Kuma. Leo, while making his move on a beautiful female, is identified as having an uncanny likeness to the face on a golden coin. This leads them to go in search of Kuma, where they find the city being ruled by Ayesha. She believes that Leo is the reincarnation of Killikrates, a companion to Alexander The Great.

The film starts with plenty of promise. A sequence in a bar leading to a huge. old-fashioned punch-up should have set the scene for plenty of set pieces and a fair bit of daring-dos. Alas, director Robert Day pulls the pacing of the piece to a complete stop, as we follow the interpret adventures across the desert, in a sequence that goes on forever.

There is far too much exposition for a film of this kind, that screams out for tightness and plenty of action.  Unlike the usual running time of a Hammer Horror, which is approximately 90 mins, this heads towards the 1 hour 45 minute mark and it really shows. When the action scenes to arrive, they seem more like light relief.

It also doesn’t help that the lead male, John Richardson, may have the looks of a matinee idol but doesn’t have the charisma. In fact, the most exciting thing about him is his mahogany tan. Richardson went on to star opposite Racquel Welsh in the aforementioned One Million Years BC, where he didn’t have to talk. It was a far more interesting performance.

So it’s up to old Hammer stalwarts Peter Cushing and Christopher Lee to inject some life into the proceedings. As Major Holly, this is a much more relaxed Cushing than usual, even allowing himself to let his hair down for some dad dancing. Lee, on the other hand, is on villain duty once again, as Ayesha’s right hand man, Billali. Bernard Cribbins adds some well needed comedy as job, the faithful valet but isn’t given enough.

That leaves Ms Andress. Yes, she was a beautiful woman who certainly left her mark as Honey Rider in Dr No. Leading a movie is another thing, as she is predominately a clothes horse for a series of sensual costumes. You actually feel she has no power whatsoever and only uses her feminine wiles to bewitch an easily swayed Richardson. 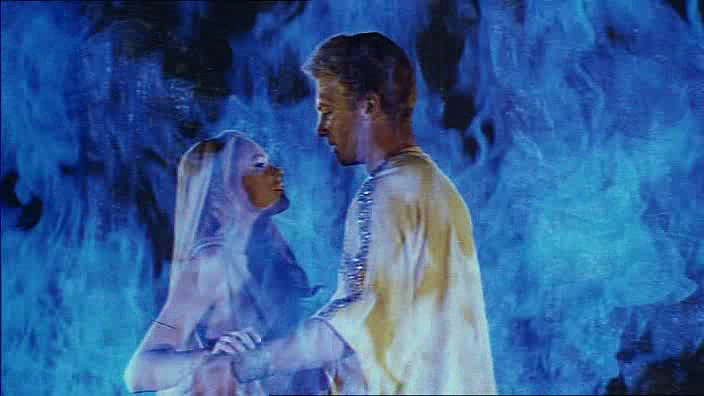 By the time the big finale arrives, the film does leave its mark but to get there is a long, hard slog. She needed a director who could deliver decent action scenes, know how to keep the pace going and allow his three males stars to do their best, while maybe recasting Richardson. Andress has the look but lacks the talent.