Watching The Delta Force, I wondered if the Cannon group were still around today, whether they would be taking on terrorist groups like Isis to form an action movie, because while this is all very hokum and typically Reagan 80’s, it does try to have a serious message about acts of aggression towards other countries.

A plane, from Athens to New York, is hijacked by Iranian terrorist demanded it be taken to Beirut. On board are a mix of Americans and Jewish passengers. This act is soon noted by the Americans and they send in The Delta Force, a group of soldiers led by Colonel Nick Alexander and Major Scott McCoy. After a failed attempt to board the plane, it soon becomes apparent that the Jewish hostages have been removed and taken to the centre of Beirut. McCoy is determined to get them back safely.

Directed by Cannon’s head honco, Menahem Golan, he has filled his movie with big screen legends. Originally a feature to star the film companies two big names, Charles Bronson and Chuck Norris, Bronson pulled out, leaving the way for Oscar winner Lee Marvin to step in. A huge coup for a company whose ideas were big but their budgets small (this cost $17 million). It plays out like two very different movies.

On the one hand there’s the political and religious stuff that somehow seem ripped from the script of an Entebbe film. There’s even a moment when a German flight attendant refuses to single out the Jews for the hijackers because of what happened in Germany. Then there’s the gung-ho “aren’t we great!” action sequences that could easily be stolen from a Rambo film, with Norris driving around on a motorbike with the capability of firing rockets, while an ill Marvin (he died not long after the film’s release) commands in the comfort of a barracks.

It does sit rather uncomfortably in this modern time and should only be looked at as a piece of nostalgia from a company who produced hundreds of this type of movie, especially for its star, Norris. With its masses of explosions, bullets flying every which way and the terrorists all cursing the Americans! while the Americans aren’t just out to kill the bad guys, they want to dispose of them in the most vicious way possible so the audiences can cheer and whoop. All this is done to a repetitive, triumphant score by Alan Silvestri.

Meanwhile the rest of the cast, looking like a who’s who of Oscar winners and nominees (Martin Balsam, Shelley Winters, Robert Vaughn, George Kennedy and, blink or you will miss him, Liam Neeson) are left with very little to do but look panicked, scared, or, in the case of Vaughn, sitting behind a desk looking bored and longing for that cheque to pay for some home improvements. Robert Forster comes out worse of all. He plays the chief hijacker, Abdul, in a piece of dire miscasting. 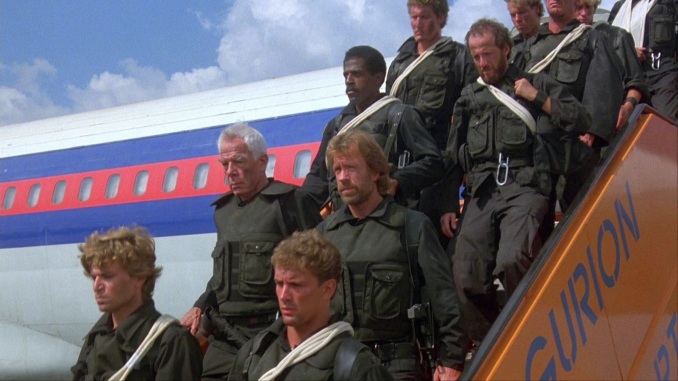 The Delta Force is a perfect example of the crassness that Cannon use to roll out every five minutes and yet, having lived through the time when they were kings of the cinema, it does have a slight feeling of a now forgotten time. It’s awful to the point of embarrassing and its politics are all over the place. Yet you watch and you say to yourself “they don’t make them like this anymore!” In a way, thank goodness. Part disaster movie, part action thriller, part political speech. Part utter nonsense.