Good Will Hunting is a film of two halves. The scenes between wunderkind Will and his therapist, Sean Maguire and then all the other scenes in between. Having not seen this 1997 Gus Van Sant film since it’s release in 1998, I had forgotten a lot about it, except those scenes, which I recognized as if I watch the film every week. That’s how powerful, how gripping and how deeply affected by them I was.

Will Hunting is a young man living in the slums of Boston, getting himself into trouble and hanging out with his buddies, led by Chuckie Sullivan. He works as a janitor at MIT, where it soon becomes apparent that this is no ordinary delinquent. He is a genius at maths, managing to solve complex mathematical equations left by Professor Gerald Lambeau. The teacher can see the possibilities and needs Will to find some direction in his life and not throw his talent away. Under a court order, Will has to see a psychiatrist and after failing to connect with five of them, he sees Sean Maguire. The pair falter at first but it seems the pair need each other.

Watching the film and listening to the conversations, it seems almost impossible that the script should come from the film’s two young stars, Matt Damon and Ben Affleck. Some have even stated that they are only the faces to make it all seem more impressive and that Hollywoood script writing legend William Goldman was behind it. Goldman has categorically denied this but you do wonder. They were friends who wrote it because they were struggling as actors and wanted parts they wanted to play.

It is a major achievement, as the scenes in and around their hometown have a certain air of authentication, yet it is not these scenes that shine half as much, even though they are built around the boys own life experiences. Where the script really excels are the scenes between Maguire and Will. Two lost souls with no real direction struggling with the world around them. Maguire, a former Boston lad like Will, has struggled to cope after his wife’s death, a pivotal event that has ruled over his decisions in life. Will, on the other hand, an orphan, thinks he knows everything, mainly through speed reading library books in his spare time and yet knows nothing. It is almost like watching the clash of the titans, where there can be only one winner.

These scenes are rich with tenderness and bite, with sorrow and joy and they are the film’s major selling point. Without these scenes, the film would not have been as successful or as memorable. It also helps that having Robin Williams on board as Sean is a stroke of casting genius. Always managing to tone down his performances when necessary, this is so understated you kind of want him to lose control, even at his darkest moments. The speech he makes to Will on a bench about not knowing everything until you experience it, is so beautiful crafted and so emotionally delivered without taking it to the levels of shouting or crying, that you find yourself emotionally gripped. A true testament to great writing and even greater performing. 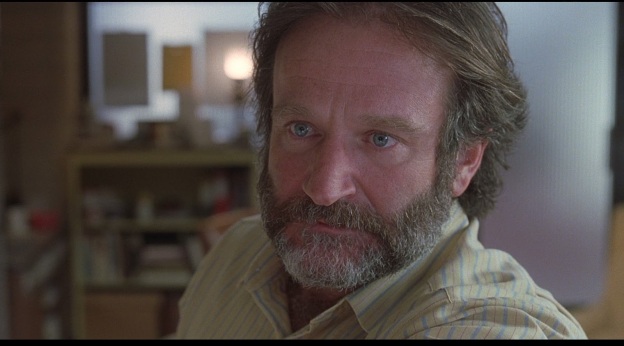 Matt Damon, since making this, has gone on to bigger but not necessarily better things. As Will, he brings an undercurrent of vulnerability behind that tough, street-smart kid. Ben Affleck looks about four, playing the local lad, Chuckie, while we should not forget a terrific performance from Stellan Skarsgard as the professor who takes Will under his wing.

If the film does have one major fault, it’s the romance between Will and Skylar, a student at one of the universities. Played by Minnie Driver, it isn’t totally her fault but the script does become morkish and it sits uneasily among the rest the of the film. You can understand why it’s there but it doesn’t work. In fact the real relationship is between Sean and Will.

Good Will Hunting is, what is termed, a crowd pleaser. A smart and intelligent film that doesn’t leave the audience feeling lost and confused. Everything is laid out for them to enjoy and if even if you don’t like straight dramas about driven along by characters, then it’s still worth checking out because it might just change your mind. And it’s worth seeing just to watch Williams deliver another masterclass in understatement.