Written by: Anthony Greville-Bell, (based on an idea by) Stanley Mann and John Kohn

There was a time when horror films were both imaginative and bundles of fun. Theatre Of Blood was exactly that, a wildly camp and outrageous shocker based around the premise of a hammy Shakespearean actor seeking revenge on the critics who spurned him. An idea so ludicrously over-the-top, it could only have Vincent Price in the lead and a host of big name British talent involved.

Edward Lionheart is an actor who had produced a season of Shakespeare plays that he took the lead in but was overlooked by the Critics Circle Award. Believed dead, Lionheart is alive and hiding in a run-down theatre, populated by drunks and down-and-outs, posing as his chorus, while he plots vicious and violent revenge on those who refused to vote for him. Taking the plays he produced, he uses each one’s brutal death scenes to kill off the men and women of The Circle, baffling the police as well as the critics themselves, each one concerned who would be next.

There is so much to enjoy in this terrific horror that it’s hard to know where to start. Director Douglas Hickox uses London as a his backcloth but without taking us through the usual trappings of landmarks and areas familiar to us. Instead, it has a grimy, run-down feel about it, helped by the dilapidated theatre Edward Lionheart resides.

Adding to the fun, he has made each of the critics a big name in British film and theatre at the time, so we get Arthur Lowe, Robert Morley (with the most memorable death involving his two poodles), Harry Andrews and Jack Hawkings (in his last film). Each have minor parts but they are massively important as to each of their deaths.

Using Shakespeare’s most violent deaths scenes as the source also brings a certain amount of sadistic joy, as we witness be-headings, mass stabbings, electrocution (by hair curlers), each one devilishly played out with an evil tongue deep in the cheek. 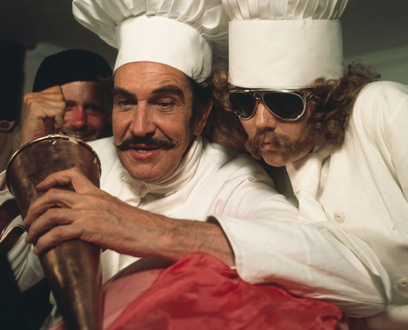 What really helps this along is the casting of the leads. As Lionheart’s daughter, Diana Rigg is an absolute joy. Almost unrecognisable most of the film (and I refuse to say why), she considers it her best film and you can understand why. It’s nice to see the former Avengers star given the opportunity not just to be a high-kicking action girl, for what she is remembered for.

Then there is the master of the macabre, Vincent Price. He must have jumped at the chance to ham things up as Edward Lionheart, the massively over-the-top actor with a thirst for revenge. He gets to perform Shakespearean speeches with aplomb while at the same time doing what he does best, being utterly evil. Running fairly similar to his Dr. Phibes creation, this is the sort of part that most actors would give their right arm for and Price is brilliant. He, too, considered this to be his favourite movie.

Forget the dire horrors that are produced today. This is a film that still has plenty of shocks, loads of blood and is complete and utter fun from start to finish. There’s plenty of surprises and any film that has Price playing a camp hairdresser with an enormous Afro is worth watching any day. Unashamedly camp and cheesy, this is a perfect horror for those who like their films heavy on the ham.