Written by: William Davies, Dean DeBlois, Chris Sanders and (based on the book) Cressida Cowell.

When you look at the advancement made my animated features since the release of Toy Story way back in 1995, it has been a slow journey. Yes, you can see certain changes as the animators themselves experiment with ideas and details but apart from some truly amazing story telling and the occasional moment when you sit there and say “yes, that was incredible” (like I did with the hair in Brave), it hasn’t been as mind-blowing as we expected.

So when How To Train Your Dragon came out in 2010, we had something to be amazed about. Released as an Easter filler, a time spot that isn’t supposed to pull in huge audiences, not like the Summer or Christmas periods, Dreamworks, who by this point had Shrek as their pet project, while the Madagascar films offered light entertainment to those not interested in the development of animation, delivered this adaptation of Cressida Cowell in a time when they weren’t expected huge things. How wrong they were, because this was more than just a fluffy family treat to ease away the pain of all that chocolate. This was a mini masterpiece and the animation bar was push up just a little bit higher. They also managed to do something that many family films stay away from: they managed to seriously injure their hero.

The small island of Berk is inhabited by Vikings who have a constant battle with dragons. Led by the mighty Stoick, this war against the creatures can only be won if they venture to the island where the dragons live but have not been found. Stoick’s son, Hiccup, is unlike his father in so many ways, a clumsy, weak boy who dreams of fighting dragons but his awkwardness makes him live a life being a skivvy.

After injuring the elusive Night Fury, a dragon no one has ever seen, Hiccup discovers it in a secret forest, where he befriends it and finds that he has powers of training dragons he never knew before. This gives him an advantage in dragon fighting school that could not only win over the villagers and his father but also the girl he is in love with, Astrid. He also finds that having a Night Fury as a friend could lead to the destruction of the creatures as a way of finding the island.

Directors Dean DeBlois and Chris Sanders and their crew of animators manage to hit all the right notes with this tale. A story of a boy wanting to be accepted, of unusual friendships that includes great use of humour as well as some spectacular pieces of animation. We are transported into a world of high-flying clouds and tracking shots over mountains and villages that are so carefully detailed. This doesn’t feel like it has been rushed, like some animated features of late. 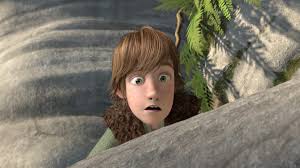 The humour works well too, balancing both the surreal with some nicely played out slapstick for the kids to enjoy and some clever, throw-away lines for the adults to appreciate. They haven’t gone down the line of just focusing on one group but there’s enough for everyone to enjoy.

The dragons are both inventive and well drawn out, giving them their own characteristics, especially Toothless, the Night Fury that Hiccup befriends. Acting more like a puppy, it’s the kind of character that Disney use to present time and time again.

What is a slight misstep, for me, is the voice talent used. Gerard Butler is perfect as the gruff, no-nonsense Stoick and Craig Ferguson fits the bill as his right-hand man (even though he doesn’t have a right hand) Gobber. What doesn’t work is the voice of Jay Baruchel as Hiccup. While being the son of such a mighty Viking with a strong and powerful Scottish accent, how comes the anti-hero has such a meek, nasally American accent? It fits the character fine but doesn’t fit with everything else around him. Surely a Scottish accent would have worked just as well?

Having said that, the rest of the film has so much to appeal, especially the decision not to let Hiccup become the hero without escaping unscathed which is something that most other animations would have ignored.

This is a fun-packed, roller-coaster of a film that pushes the boundaries of animation and with a simple story of redemption and bonding as its basis, it doesn’t need anything more to complicated it or play the heavy-handed moralising. It is what it is, a big-hearted blast.