Written by: (and story) Vincenzo Cerami and Roberto Benigni

You needed to be either a brave man or a fool to make a fairy tale out of the horrors of the Holocaust and Roberto Benigni is both. One of Italy’s biggest names, he tackled the difficult subject matter and produced a film full of warmth, humour and pathos. From speaking to many friends, it’s a film that most hold dearly to their heart but I have to admit, and while not wanting to cause upset or controversy, I do find Life Is Beautiful problematic. Not because it deals with such a shocking and disturbing piece of history in a way that many may find offense. No, I have a problem with the film’s director, co-writer and star, Roberto Benigni.

1930s Italy and Guido, a Jewish book seller arrives in a small village with his head full of wild ideas of opening up a store but with no money and no job, he has to resort to working in his uncle’s restaurant as a waiter, serving the rich and influential. While on his way to the village, he has a beautiful lady literally fall into his arm. Guido instantly falls in love with Dora but he has to win her over first. Meanwhile, at the restaurant, he befriends a doctor obsessed with riddles and he eventually wins the affections of Dora. They marry and have a son who they dote over.

The Second World War begins and the Germans are taking the Jewish community into the concentration camps. Separated from his wife and with a frightened little boy by his side, Guido makes up a fantasy world for him, telling him it’s all a game and that they must get 1000 points to win the game and a tank. Hiding the horrors inside the camp get harder and harder and Guido must be more and more inventive. Hope arrives when the doctor he helped solved riddles arrives as the camp’s physician but is it false hope and can Guido really protect his son from the almost inevitable?

Benigni’s film is a stark contrast to the much more realistic and harder hitting Holocaust dramas, Schindler’s List or The Pianist. Some people were not amused by his light touch for the subject matter, feeling it was all very flippant and didn’t respect the victims who had died. Some have even called for it to be banned. What many have tended to forget is that Benigni isn’t being disrespectful and he doesn’t shy away from the life inside those camps, he is just looking at it from a very different angle. He’s looking at one man and how he tries to protect his young son. Those same people who have criticised the film could be asked the question…what if you were in his shoes? What would you do?

Splitting the film in two halves so we can understand Guido’s view of the world as a fairy tale helps to understand his actions in the second half. The first part is very funny and so when we get into the darker more sombre second half, it plays more like pathos than out-and-out laughs. It helps that it is a beautifully shot film and nicely played by Nicoletta Braschi as Dora and, even if he does get slightly grating in places, Giorgio Cantarini as Joshua, the young innocent, is cute enough to allow him those moments. 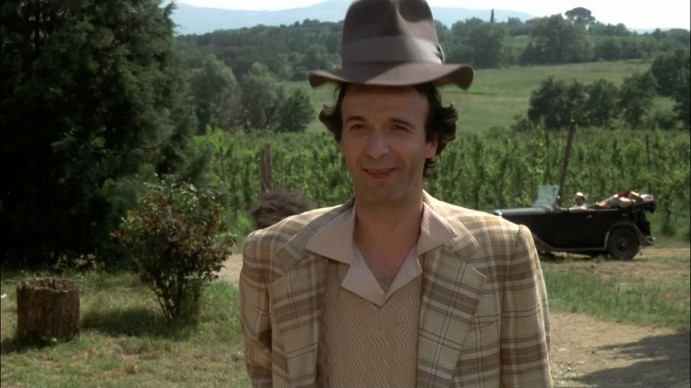 This is where I get to the film’s problem and not because of his director or script writing but I wish Benigni would have reeled his performance in. He is manic, loud and louder still. His performance as Guido is full on from start to almost finish. Some points this works extremely well. His demonstration of his waiting skills, describing how to serve chicken, is an absolute blast and proof why he is so respected in his native country. Where he could have calmed down more is during the Holocaust scenes. When he does, like the moment he realises that the Doctor doesn’t want to talk about helping him, is a magnificent. You literally see his disappointment and his heart sink. It shows Benigni can do subtle and small. I only wished he had shown this side more often. 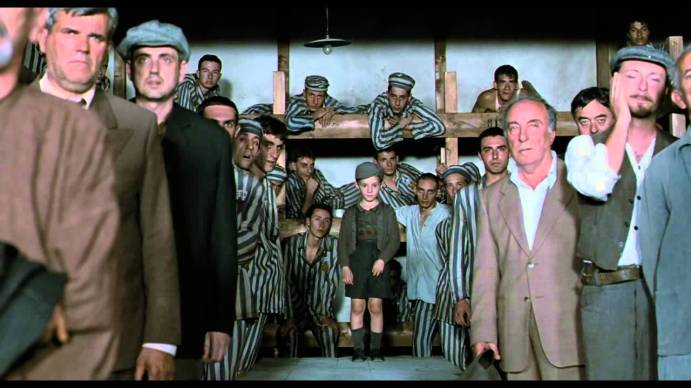 The film does have one massive positive. It opened the door to many that subtitled films aren’t all arty. Many have said this is the best Italian film. I disagree (Cinema Paradiso by a long shot) but without breaking anymore hearts, it is a great movie and one that did deserve the accolades it received. It’s a film about hope. About love. A fable.