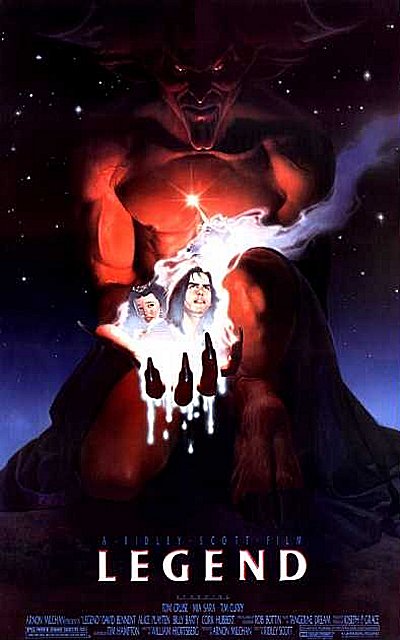 I first saw this almost 30 years ago when it was released in the cinema and I didn’t have a clue what it was about. Having not watched it since, I thought it was about time to revisit it, in the hope that age has made it more comprehensible. It wasn’t. in fact, if anything, it has become more and more like a train wreck. No matter how you look at it, it’s as if Ridley Scott wanted to make a feature length advert for something but wasn’t sure what. 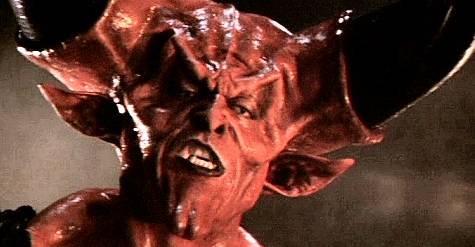 Lili is a princess who meets up with her friend, Jack, in a forest. Wanting to impress her, he takes her to see a unicorn and while she is getting close to the creature, a goblin shoots a poisoned arrow into it, making it run. Suddenly, the beauty of the forest turns to ice and darkness. The goblin removes the unicorn’s horn and captures the second creature. Lili runs away and finds herself in the coven of the Lord Of Darkness.

Only one person can save the unicorn, Princess Lili and remove the darkness and that is Jack. Along with an elf, some dwarfs and a fairy, they mismatched band must head into the Lord Of Darkness’s realm and hope they can save the day.

Before I give this film a grilling, which I know will upset some people, I am a massive Ridley Scott fan. He has produced some of the finest films of modern cinema and he must be respected for his work. I am also not a huge fantasy fan. I find the whole genre mystifying and so if I had the choice to watch a fantasy film, I’d look for other fare.

So, Legend, I have to say, still looks incredible. Scott has an eye for the visuals that is almost second to none. He can make anything look magical. Having massive sets and designs to play with, he utilizes them well. His cinematographer, Alex Thomspon, does a very impressive job with the images and if it wasn’t for anything else, I would say that this is one of Scott’s best films, visually.

The problems lie elsewhere, mainly the script and the editing. William Hjortsberg story is a mess. It has no real logic, it has no real decent lines and it borrows madly from other, similar films and stories. The production was hit by many problems and set-backs (including a fire that brought things to a grinding stop for a while) and it was hindered by a film company who got their hands on it. It does seem, in places, like someone had edited it with blunt scissors, as scenes cut back and forth, making it both confusing and somewhat bizarre.

The performances are ok. A very young Tom Cruise must look back at this and wonder how he got from there to where he is now. Wearing a fetching skirt and floppy long hair, he does his best with the material, as does the beautiful Mia Sara as the princess. Thank goodness for Tim Curry, though, as the Lord Of Darkness. With his enormous horned headgear and devil look, he spits out his lines like a deeper speaking Frank-N-Furter. He relishes in his evilness and he brings the film some well needed life.

I do find that some films improve with age while others sometimes can mystify and you wonder how they became popular. Scott has released a longer version since the film’s first release and maybe I need to check that out but on the return viewing of this cult favourite, I have to say I wasn’t impressed and if it wasn’t for the visuals or Mr Curry, I would have switched off. Boring and confusing, is how I would sum it up. I’ll wait for the angry retorts from the fans.