Written by: Ken Finkleman, (based on the characters created) Jim Abrahams, David Zucker and Jerry Zucker

It is very easy to be snooty about Airplane II: The Sequel, an almost carbon copy of the enormously successful 1980 original that is still regarded as one of the funniest films ever made. It’s easy because it does borrow very heavily from that classic comedy, even lifting whole jokes. Yet if you look over the familiar stuff, there is still loads to admire, especially when you compare it to the Scary Movie series or even the whole “Movie” collection that infested our screens a few years back. 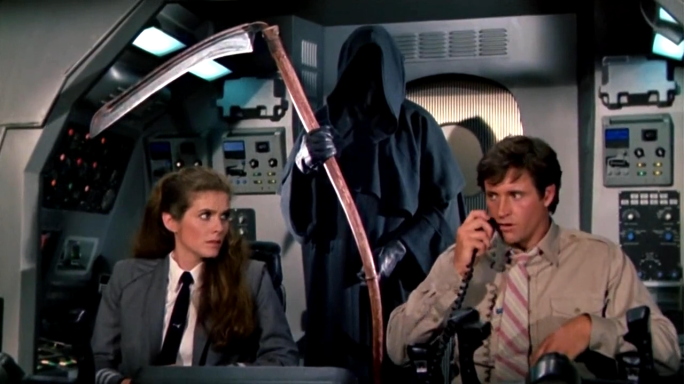 The Mayflower is the first passenger space shuttle into space but due to cut backs and short cuts, the wiring into the main computer is not perfect. Ted Striker has been trying to tell everyone that but he was admitted to an asylum. Escaping, he boards the doomed shuttle, only to find Elaine, his ex, aboard and a computer with a mind of its own. There can be only one man who can save the passengers from flying straight into the sun and that is Ted Striker.

The plot, as you can tell, is almost identical except for swapping a plane for a space shuttle. Writer and director Ken Finkleman also uses a handful of the original gags to pad out his film, as if fans of the first needed some reassurance that they were watching a sequel. So we have jokes in the departure lounge, jokes about passengers, news reports and the play on words. “The Sun! What is it?” “A large, fiery ball at the center of our solar system, but that’s not important now. ” 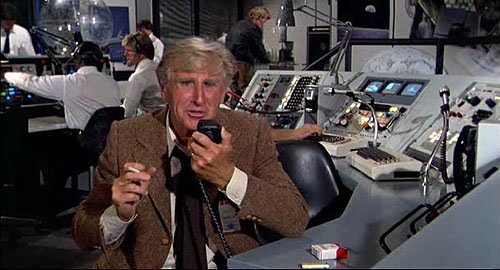 He also cheats by showing scenes from the first film (the slapping of the passenger is re-enacted in a courtroom sequence with a flashback to the original). Yet with all these copies and rip-offs, he does manage to add a few well placed gags of his own that work like a charm and I think that its main criticism is the copying, yet it does have its own voice as well.

Some of the new gags are nice, throw-away ones, like the arrival of Striker at the airport, where he is seen jumping out the back of a truck that has pods in them like in Invasion Of The Body Snatchers. Having Peter Graves return as the captain, gives an opportunity for a neat Mission: Impossible joke and a poster in the background of a store, sees an elderly gentleman in boxing attire, used to advertise Rocky XXXVIII.

The film’s biggest joke comes with the arrival of William Shatner, as the captain of a Lunar Moonbase, in which he is seen in a screen that becomes something else. Even the Zucker boys paid the compliment by including a gag from this film in their cult TV comedy, Police Squad, in which a witness in the court case twists the lawyer’s questions and makes them into names. (Hard to explain but very clever indeed).

Airplane II isn’t as painfully funny as the original and let’s face it, there isn’t a spoof comedy since that has managed to outstrip Airplane of that top position, yet it does have a place in the cinema world and having sat through loads of unfunny spoofs, it does work and it does make me laugh. It’s always a pleasure seeing Lloyd Bridges be silly with such deadpan perfection and Stephen Stucker reprising his role as the most surreal air traffic control operator there ever was, even the familiarity of the piece does make you feel somewhat comfortable.