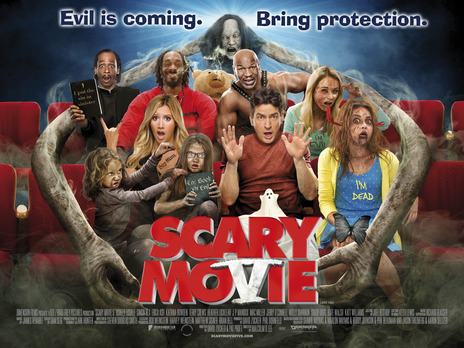 I was talking the other day about great comedies. The subject of Airplane! came up. Anyone who knows me will know that it’s my second favourite film of all time. I remember watching it on its initial release and spending most of the time on the floor from laughing. Even after all these years, it still has the power to make me chuckle and giggle and even, dare I say it, belly laugh. But why, after 35 years, does it still have that power? Plain and simple: the jokes come so thick and fast that the ones that don’t stick are hidden by the many that do. Also, Jim Abrahams and the Zucker Brothers knew that it was silly, knew that it was bizarre and yet all the while got their actors to play it straight.

Strange then that David Zucker couldn’t pass down those words of wisdom to the cast of Scary Movie 5, a series that failed to miss the mark even from the first one. The laws of spoofs are simple: don’t overplay your field and go for something that people recognise. With Airplane, it was disaster movies. With Blazing Saddles, it was westerns. The Naked Gun was cop shows. Here, the whole set up is around one film that, quite frankly, not everyone saw.

Jody and Dan are asked to be the guardians to Dan’s nieces and nephew after they are found in a cabin in the woods. Jody struggles to get on with the girls, although strange things begin to happen in her home, while she has to cope with getting the lead in a new ballet.

There is no reason to explain the plot as it’s all hung together by the plot of the long forgotten horror, Mama. Add into the mix parodies of Black Swan, Rise Of The Planet Of The Apes, Evil Dead and so on, as well as poking fun at pop culture. The opening sequence involves Charlie Sheen and Lindsay Lohan ridiculing themselves about their various run-ins with the law, which may have been funny at the time but suddenly becomes incredibly dated.

This is where the problems lie within the film. If you don’t know the movies they are parodying, or unfamiliar with the references, then the jokes fall flat on their face. As with the Sheen/Lohan sequence, the world is moving pretty fast for these kinds of jokes to stay fresh and relevant. So already you are narrowing your audience. A film like Airplane has managed to stand the test of time because it uses wordplay, puns and just pure wit and invention to be funny.

The film isn’t a total disaster and there are a few moments when you do find yourself laughing. A sequence in which Ashley Tisdale’s character, Jody, is getting familiar with the new children in her life, is mildly amusing and even some of the references do hit the spot. They are very few and far between, mainly because of the aforementioned but also because they are played in a too knowing way. A wink, as it were, to the audience to say, we know this is funny stuff. That’s when it isn’t.

Again, Airplane! worked because the actors played it dead-pan, like it was the most serious drama they had ever been involved with. Hence casting the likes of Leslie Nielsen, Lloyd Bridges, Peter Graves and Robert Stack was genius. All of them famous for being straight actors. All of them taking their roles seriously and delivering their lines without a hint of irony or tongue in cheek.

Scary Movie 5 isn’t the worst parody around. It does have a few moments that are funny. But in a film that boasts to being a comedy and having so many attempts at target, it’s sad to see so many failures. Especially when one of the legendary Zucker brothers is involved. He should know better.