Neil Simon is a God among comedy writers in my eyes. One of America’s greatest playwrights, his work, during the late 60s and 70s, provided the screen with some comedy gems like Plaza Suite, Barefoot In The Park, Prisoner on Second Avenue and California Suite as well as the comedy classic, The Odd Couple, which saw the second teaming of Walter Matthau and Jack Lemmon. Lemmon would star in a host of Simon comedies, where his anxious, highly strung persona could get a deserved airing. No more was it put to better use than this 1970 comedy of nightmare proportions. 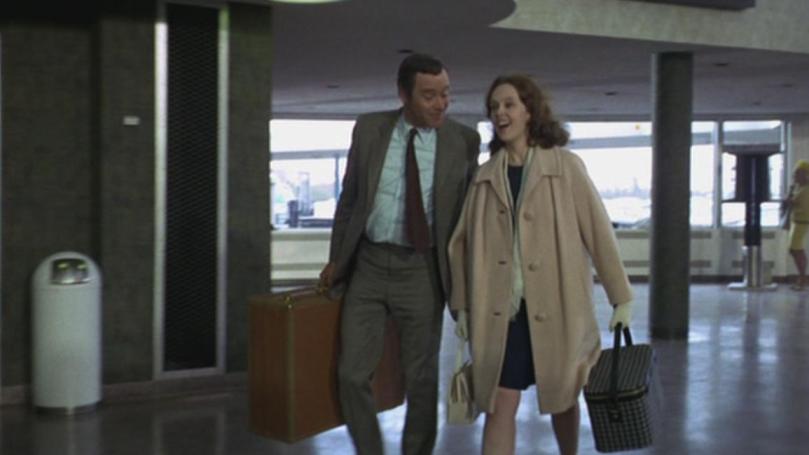 George Kellerman comes from Ohio and has been asked to go to New York to attend an interview for a Vice-Presidency of Sales in a Plastic company. The whole trip from small town America has been set up: flight, hotel and then interview. With his doting, long-suffering wife, Gwen, in tow, George is particular of not eating on the plane as he has an expensive restaurant lined up. Then their flight is caught in fog, leading them to be sent to Boston. They lose their luggage, find it almost impossible to get transportation to New York because of a strike and these are only the start of a nightmare 24 hours for George and Gwen, as they go up against the big city and everything that it throws at them.

The basic premise might sound fairly familiar. A similar story line was used in the Steve Carell/Tiny Fey comedy Date Night. Let’s also not forget the remake from 1999 with Steve Martin and Goldie Hawn. Simon’s film has something the other two didn’t: a cracking script. Simon’s one-liners are legendary and they are on fire here. His writing ability to have the characters throw insults at each other and everyone around is brilliantly on show here. Under the direction of Arthur Hiller, a film maker that never really got the recognition he deserved, he allows the script to do the work. Even though it has the feel of a film made in the late 60s (filmed in 1969 but released the following year) not only by it’s occasionally haphazard cinematography (and the costumes), Hiller has the good sense of never making the film fussy or trying too hard to get laughs. The laughs are there in the dialogue. You could easily turn the picture off and listen to the banter between George and Gwen and still get the wanted effect.

It also helps if you have the right performers saying those words, who understand the timing and pace that Simon manages to write into his scripts. Jack Lemmon, who has always been one of my favourite screen actors, can read a phone book and make it funny. This is why he was always a first choice for working with a Neil Simon script. His delivery of lines is second to none. With a nervous energy, his performance as George is a blast. A man usually in control with his destiny, he struggles when things are out of his hands and you can see a man on the verge of a nervous breakdown.

To compliment him, the massively underrated Sandy Dennis plays his wife, Gwen. Having really coming to the attention of the film world with her performance in Who’s Afraid Of Virginia Woolf, her screen career never really took off, which is a pity, as she had one of those faces that could tell a thousand emotions in just one look. As the put-upon Gwen, whose decisions are made by her dominating husband, it is a sweet and commanding performance and matches Lemmon’s comic timing perfectly. The pair make for a terrific partnership and its a shame they never got to make another film together.

As things go from bad to worse to worse still, the comedy becomes more frantic and furious and this no only is a terrific comedy but also a nicely pitch satire of life in a big city. New York plays as big a part of this film as the leads and Simon, who obviously loves it, also knows the dangers that lurk and pitches it perfectly. This is consistently funny with line after line being just as funny as the next. Even the ending is deliciously perfect. A film that has gone from the conscience due to time but one that needs to be rediscovered by those with a love of comedy.