The power of good cinema can be electrifying. It can make you emote like crazy. You can become so engrossed with the story that it will make you laugh, cry, angry. Good cinema can make you emote like mad. Compliance is a film that will split the audience in half but no matter what side you are on, it will have you emoting, be it questioning what you have seen or just plain angry that it has been allowed to go on.

Becky is a young girl working in a fast food restaurant, desperately holding on to her job. She knows that manager Sandra doesn’t really like her but she will work by the book to keep her position. Sandra receives a phone call from the police, Officer Daniels. He tells her that a customer has come to the station and put in a complaint that Becky has stolen money from her. Becky is brought into a storeroom by Sandra, who confronts her. No one really believes that Becky would steal but Officer Daniels wants Sandra to get to the bottom of this. Then the nightmare begins as Daniels makes demands that are beyond questionable but will Sandra fall into complying.

Craig Zobel’s low budget drama is inspired by true events. In fact several cases have been recorded, which makes this film even more intriguing. How can a man on the end of a phone convince someone so fervently that they are willing to do anything they like? 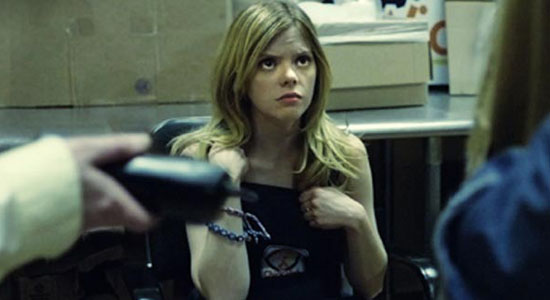 The performances are exceptional, with a natural feel behind them. These aren’t polished performances yet they seem so real and these are people you probably come across every day. Ann Dowd, as manager Sandra, steal the film. A likeable yet somewhat naive character, she quietly delivers a performance worthy of recognition.

Pat Healy as Daniels, most of the time just being a voice on the phone, carries off an almost impossible role with flair. Without his convincing performance the film would fall apart and yet he and Dowd are the pivotal parts of this excruciatingly tough picture. Not taking anything away from Dream Walker, who as the victim, you genuinely feel for her plight as the humiliation gets worse and worse.

So why should you see this film? Quite simply it will either make you incredibly angry or will shock you. It’s an adult piece that shows the gullibleness of the human condition, that a group of people are willing to do anything just on the belief that authority is telling them. As it gets deeper and darker, you do find yourself questioning “Are these people really that stupid?” and the answer is yes…and no. Put yourself in their place. What would you do?

Zobel has produced an intelligent, thought-provoking piece that will stay with you long after the lights have come up and you are heading home. You will play the scenes in your mind. You will question the actions of the protagonists. You might even ask yourself why in the world would someone want to do that to a complete stranger. Anyway you look at it, this is a powerful and stunning piece that demands your attention.

If you like challenging cinema or a film that makes you think and debate, then look no further. I guarantee you won’t be disappointed. Not an easy watch but one that you will be glad you saw.