Never judge a book by its cover. The same applies to movies. I went into Dead Man Down, a revenge thriller produced by WWE (World Wrestling Entertainment) and starring Colin Farrell, whose choice of films hasn’t been that brilliant recently, with expectations as low as low can be. I was expecting a violent, low grade tale, the type that would normally go direct-to-DVD and end up clogging the shelves at Asda’s home entertainment department. But no. This wasn’t what I expected at all. This was more like an art-house version with a hint of low grade direct-to-DVD. More a study of damaged goods than out and out action.

Crime Lord Alphonse is a worried man. Someone is sending him cryptic messages along with squares of a photograph that are slowly being pieced together while bumping off his henchmen  Paranoid to the extreme, Alphonse is accusing fellow crime members, not realising that it’s someone closer to him. One of his own, Victor, a quietly spoken man who saved his life, yet is full of vengeance after Alphonse took his family from him. Slowly picking him apart, Victor discovers that someone witnessed his most recent executions, a woman who lives opposite him called Beatrice. Flirting with him, she blackmails him into committing her own revenge on the man who made her crash her car, permanently scarring her for life. The pair find that their own dark past are bringing them closer together but Victor’s plans are being pieced together by his best friend and fellow henchman, Darcy, who has ambitions of his own.

If you are a fan of mindless violence and explosive set pieces, even though there are a few here, this mainly relies on the spoken word. This is a film with acting in it more than just shooting. Script Writer  J.H. Wyman and director Niels Arden Oplev seem more interested in character development than high body counts and while this is all very commendable, it is also, strangely  the film’s downfall.

The first hour of this under two hour tale is rather plodding and slow moving. It does give us time to fully understand the characters actions and motives but at the same time, it doesn’t necessarily have to take an hour. Oplev, who was the director of the original The Girl With The Dragon Tattoo, is a solid film maker who can create atmosphere and mood with a simple set up but at the same time, the pace needs to quicken if he wants to keep his audience’s attention. The film failed to find an audience in the States for that very fact. Advertised as an all-out revenge actioner, it doesn’t tell us that this is more about the human condition.

The cast is very strong indeed. Farrell finally gets to show his acting abilities here as Victor, while still maintaining an action man persona. As a man dealing with grief and vengeance, while confused by the affection he is building with Beatrice, Farrell is totally believable. This is probably his best role in some time. As the troubled Beatrice, Noomi Rapace once again gives a good performance but it does lack the real sympathy that the part deserves. She is fine but I guess I wanted more. 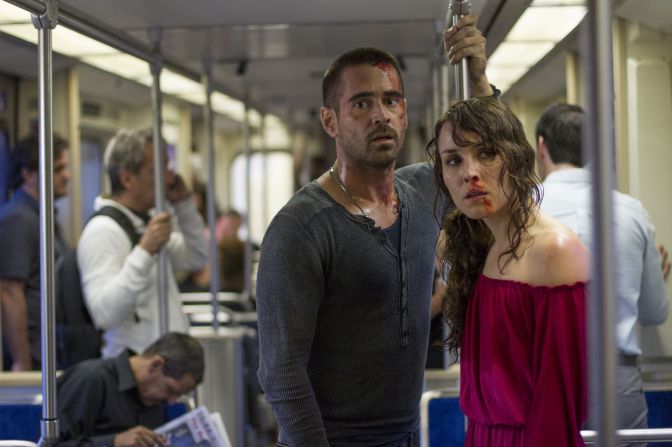 As Alphonse, Terrence Howard is perfectly cast, a mix of the arrogant cool with the paranoid, while Dominic Cooper, with a slightly dodgy Brooklyn accent, didn’t quite do it for me as the hard-nosed, ambitious Darcy. Isabelle Huppert as Beatrice’s mother was completely wasted as I know what a terrific actress she is, this is a character that is badly underwritten and, in truth, wasn’t really that necessary.

When the action scenes do appear they are well handled but hardly exciting. It did seems a strange uneven mix and I did come out thinking it was fine but not magical.  As for the title, it’s terrible and needs changing immediately. A brave attempt to shake up the genre but I don’t think the multiplex audience are ready for it just yet.