When I was growing up the slasher horror film was at the height of its popularity. A heady mix of masked killer stalking teenagers to murder in the most grisly way. So we had Halloween, Friday The 13th and a host of other rip-offs and wannabes. These movies soon became tiresome, relying heavily on stereotypes and generic plot devices just so the audience could enjoy another bloody death by an axe, or a knife or any amount of sharp or blunt instruments. Wes Craven’s Scream films tried to satirize the genre but even they fell victim to the very thing they were originally poking fun at. It seemed that the slasher movie was dead. Until now. Until Adam Wingard and writer Simon Barrett has taken the genre and given it the shake up it needed. The result? A very gory yet enormously fun horror.

The Davison family are having a get together. The extended family are all meeting up, brothers and sister, along with their boyfriends/partners/girlfriends. Crispian, a teacher, has bought his new girlfriend along, former TA and now student, Erin. His personal grievances with his brother Drake come to a head when, while arguing at the dinner table, the family come under attack by masked assailants. Dressed in black and wearing creepy animal masks, one by one the family members are being hunted down and killed. Can they escape the nightmare? Who are these killers? Is there some hope among the group who can turn this deadly night around?

Wingard and Barrett have seen past slasher/home invader films and seen what the problems are. They have become far too predictable. They rely on the audiences familiarity with the situations and the typical casting of teenagers. We know that the virgin, the naive and nervous one will turn out to thwart the killer. It’s a ply first used by John Carpenter in the granddaddy of slasher horrors, Halloween. So gone are the familiar trappings. These are a family made up of old and young. There’s no virgins, no jocks, no jokers. These are ordinary people having a get-together.

They then give the killers a motive. No longer are they doing it for revenge or, for that matter, just for the love of the kill. These murderers are there for a purpose that I cannot reveal here. Just to say it’s one of the many reasons this film works.

So there may not be originality in the use of weapons, household appliances. Anything that can puncture or enter flesh with as much blood as possible is on use. Wingard does use the old adage of leaving it to the imagination with some of the more disgusting  kills but he obviously wants the audience to squirm in their seats with others and squirm they certainly will. this is not a film that is subtle with its crimes. Knives, glass, screwdrivers, cross bows, machetes, even a food blender are used to horrific effect. While they tension is racked up to 10 and there are plenty of “behind you” moments, that will have you jumping, it’s also surprisingly funny too. A definitely relief after all the murders. 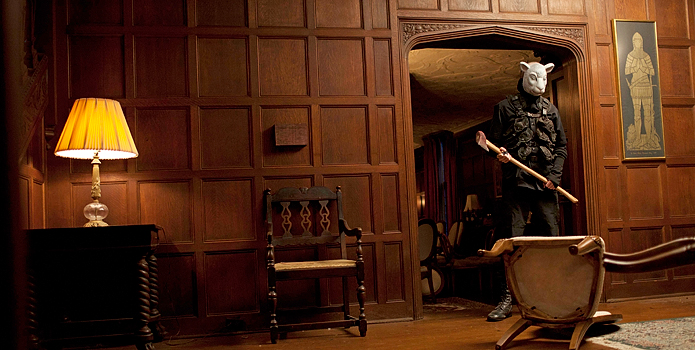 The cast are reasonably good, especially former Home And Away star, Sharni Vinson, who could be the new poster girl for tough females. All of them are full of energy and are believable and it’s this energy that becomes infectious. after we get to know, well briefly, who these people are, then the film sets into making you jump, scream, laugh and basically have a good time at a horror film.

So thank you, Mr Wingard, for delivering this to us. You have returned our faith into a genre that was going down the pan. It might not be everyone’s cup of tea but those who like a little bit of blood (or a lot) and like being scared, then you are going to finally see the light, forget about those terrible, so-called horrors like Sinister or Paranormal Activita 23 and get down and dirty with a brutal, vicious, creepy, bloody good time from this gem. Puts The Purge to shame.