I have to start by giving you a word of warning if you are thinking of taking your children to see The Lego Movie. Don’t. Leave them at home. Then go and see it yourself because this is the most un-children friendly children’s film I have seen in a very long time. I’m not saying they may not enjoy it but you will enjoy it a whole lot more. Don’t be fooled by the title or the dire poster, this is one of the most impressive, bizarre, inventive film I have seen in a long while…and it’s utterly bonkers!

Lord Business wants complete control over the various worlds that populate the Lego Universe and has Kragle to stop the changes. A prophecy has been spoken of a MasterBuilder, the Special, being the only one to find the Piece of Resistance and save the universe. Emmet is a regular builder who is hardly “special” and when he accidentally stumbles of the magical piece, his world is turned into a roller coaster of adventure as he joins a group, led by the feisty Wyldstyle, the wise Vitruvius and Batman, to stop Lord Business.

What is so striking about the film is the animation. Apart from it being a kaleidoscope of colour, like some 60’s psychedelic vision, the attention to detail is extraordinary. Everything is Lego. Not only are the buildings and characters but the land, the sea, clouds, even the explosions are Lego created. compared to some films, this is almost a total work of art, lovingly crafted.

The energy is incredible too. Everything is pushed up to 11 as the impressive battles have figurines, crafts, buildings smashing, crashing and exploding at such a pace, you almost feel exhausted just watching. In a sense I am glad I saw it in 2D as I don’t think my optic nerves could take the onslaught. You do understand why it’s at a breakneck pace, so that you don’t see the obvious holes in the outlandish plot.

So why isn’t it for kids? I am sure they will love the colour and vibrancy that the film brings but the humour is so adult and delivered so fast that kids will either not understand or just not hear it. There is so much to take in that while you are watching the main action, something equally as funny is happening in the background, like, for instance, two robot figures battling with a used plaster. 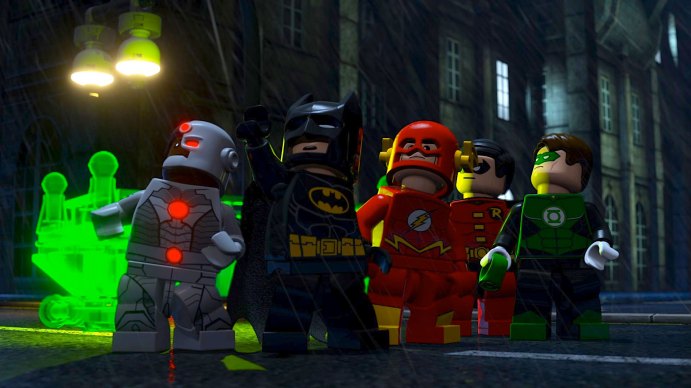 Director Phil Lord and Christopher Miller have really gone to town with the creation of their universe, adding visual gags, wordplay and pop reference like some kiddies version of Airplane but they come so fast you feel like standing up and saying “Stop for a minute while I catch up!”

The vocal talents are spot on. Chris Pratt, who stole Delivery Man from Vince Vaughn, makes for an amiable Emmet, while Elizabeth Banks uses her comic skills to create the all-action WyldStyle (“Are you a DJ?). The real coup is getting Morgan Freeman to voice  Vitruvius, a god-like figure, with the voice of grand authority and Liam Neeson as Bad Cop/Good Cop, a hilarious schizophrenic performance as he bounces from soft Irish tones to his tough guy persona (and a brilliant running gag involves Bad Cop kicking a chair).

The other master stroke is getting comedian Will Arnett to voice Batman and on the strength of his performance, could go down as the best Batman of all time. He also gives us some of the funnier gags. It doesn’t end there either. Throughout the film you’ll spend a large proportion desperately working out who is voicing who (especially in a neat Star Wars gag).

If the film suffers from any real criticism, it’s the slightly morkish ending with a special message, mixing live action with the Lego pieces but it’s a small blip in an otherwise chaotic and crazy world which proves that you should never judge a book by its cover. The Lego Movie had every opportunity to fail miserable. It doesn’t. It takes the bull by the horns and rides with it at tremendous speed and I think it’s the best animated fun I have had in the cinema since Despicable Me 2.  It would surprise me one bit if this didn’t pick up a cult following and ownership will be with the adults.

One other thing…EVERYTHING IS AWESOME! (See it and you will understand)