Written by: Diane Ruggiero and (story and based on the characters created) Rob Thomas

Confession time. I have never once watched an episode of Veronica Mars. So going into the Veronica Mars movie, I had absolutely no idea what to expect. All I knew was that she was a private investigator in high school. I also knew that like the TV series Firefly, this was canceled before its time and it was the fans who wanted more. The result is an often wordy yet surprisingly fun detective thriller. 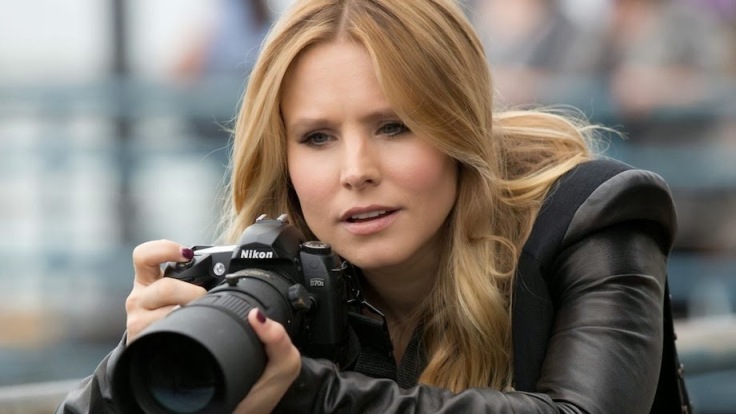 Veronica Mars, a former teenage detective, has grown up, moved out of her hometown and is on the verge of getting a job in a top law firm in New York. However, she gets a call from former boyfriend Logan who has been accused of murder.  Unable to resist, Veronica returns to her home, to rekindle old friendships, old rivalries and try to prove that Logan didn’t kill his rock star girlfriend. At the same time, Veronica has to battle with her past demons as well as deciding on her future.

The back story behind this movie could actually make it a separate movie.  After being cancelled, show creator Rob Thomas knew that the fans wanted more.  Founded in large parts by a campaign on Kickstarter.com, in which Marshmallows (the nickname for fans of Veronica Mars) could pledge money for a chance to appear as an extra in the movie, both Thomas and star Kristen Bell went to Warner Brothers and they agreed to distribute the movie. Thus the film was made and is finally here.

So what did a non-Marshmallow think of it? As a basic premise, I should imagine that the TV series was both fun and a neat twist on all those other teen dramas that seem to overpopulate American television. It’s often the way that the more interesting and different ideas never got down well with TV execs and so without given them a chance they are gone (see Firefly). As a feature film, I think it struggles, mainly because it looks like an extended TV show.

The script is incredibly wordy, with explanation after explanation, mainly due the fact that there will be some people, like me, who won’t have a clue who these characters are. Credit to Thomas and co-writer Diane Ruggiero for remembering that. In the same breath, though, it does drag the film down and the pace dips during the first act as each new person appears on screen.

The sense of capturing that old style private eye flick is there, with cock-sure voice-over, smart alec one-liners and the occasional moment of peril. It is amusing in places and while the thriller aspect is played out, it does feel secondary to all the other stuff that the characters are dealing with (past recriminations, bonding of old friends, occasional nods and winks for the fans to enjoy). Look out for a funny cameo from James Franco that will have you wondering about rhymes to orange.

Performance wise, the cast are obviously familiar with their roles and they slip into them like they’ve never been away, led by the one person who seems to have been the only one to have made it big outside the show, Kristen Bell. She is sassy, mouthy and sometimes over confident and this works for her old school detective role. There are moments when you wonder why she is didn’t just stay in New York and go for that job but then, this wouldn’t be much of a movie. Bell as a lead carries the film well and she is watchable enough to hold things together.

After seeing Serenity, the spin-off film to Firefly, I was desperate to see the TV series. Did Veronica Mars have the same effect? Not really. While the film was fun and it did make me laugh in places, it all seemed a little laboured for my liking. I am sure that fans of the series will absolutely lap this up and will reminisce about the old days. For me, someone who has come in completely virginal, it was fine but maybe a two hour TV special would have been better suited for this.