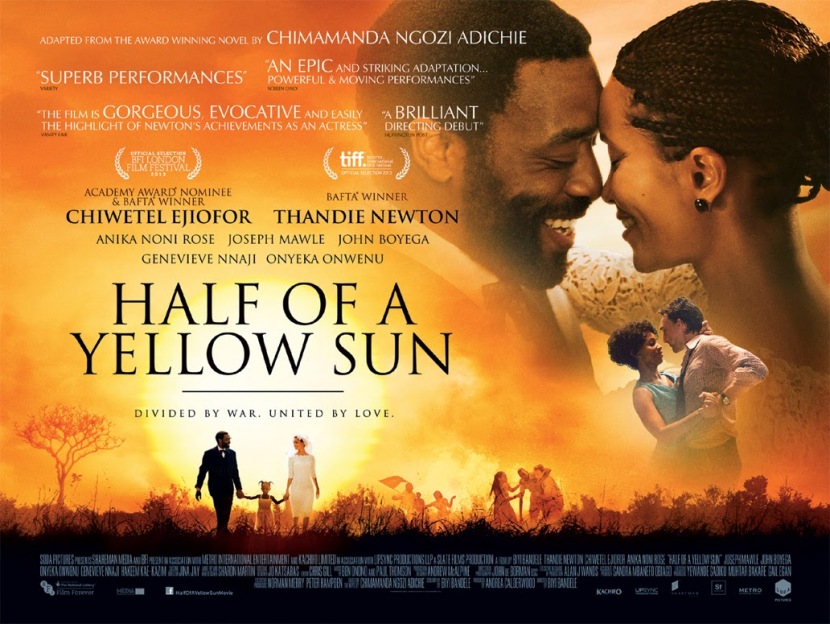 Written by: Biyi Bandele and (based on the book) Chimamanda Ngozi Adichie

Based on the award-winning novel of the same name, Half Of A Yellow Sun has plenty of promise; good direction, strong performances but it fails to deliver a satisfactory film because the story is so sweeping and epic that the film can only show sections and so we have a melodrama that flits from one scene to another without the audience feeling any really emotional depth with the characters.

1960 and Nigeria is going through independence. Twin sisters, Olanna and Kainene, brought up in a world of business, have higher ideas with men that surround their worlds. Olanna is in love with revolutionary Odenigbo while her sister, a player on the social scene, falls for an Englishman, Richard. As the traumatic events affecting their country starts taking root, the sisters are having to cope with personal problems and the difficulties with their own lives.

Writer/director Biyi Bandele bravely attempts to adapt Chimamanda Ngozi Adichie’s highly regarded novel but instead of dealing with one of two issues, the film attacks the whole story but in the process it loses any real emotional punch. Including newsreel and maps for those who are unfamiliar with the history and events surrounding the Independence of Nigeria, some of which are shocking and rather disturbing ( a General’s quietly spoken threats sends a shudder), the human drama comes across like a disjointed soap-opera, with sister and partners jumping into bed with each other, and others.

This is perfectly fine, having a human drama set against the backdrop of historic events but in trying to cover the whole book, the scenes skip and jump all over the place. Each scene could be taken out and watched individually or used for the actors show reels but put together they still seem isolated. This makes it very hard to really empathise with the characters and so we get some very strong moments but they really don’t amount too much.

The film does kick into gear when the country comes under a military coup. A scene in which Richard is in an airport when the army start picking off individuals is very similar to scenes in Costa Grava’s excellent 1981 drama, Missing. In the final half hour, we start to get a gripping tale of survival among the lead characters but by then it’s too late, we have been lost to all the melodramatic stuff beforehand.

The performances are all outstanding. Chiwetel Elijofor, fresh off his award-winning performance in 12 Years A Slave, proves, once again, what an incredible actor he is. As revolutionary, Odenigbo , he has produced a deeply intense character while Thandie Newton is equally good as Olanna, allowing her to be more than just a pretty face with a strong-willed performance.

Bandele’s film is also handsomely mounted and even on a shoe-string budget, captures the time and tone of the period well. It’s just a shame that ambition has affected the final product and while it would have made a perfectly solid mini series, as a film it fails to ignite, even with all the positives that the film has to offer. Although, being a complete novice to the events of 1960, it did make me want to know more. Like The Book Thief, taking a book that is so dense and rich in story and character, you have to be ruthless to get the best from the original source material and this is the film’s biggest failing. As they sometimes say, less is more.