What do you do when you retire from a career that has taken over your life? Sit around moping? Find a new hobby? Go on holiday? Or have an affair with a much younger man? Marion Vernoux’s May to December romantic drama serves up just that question in a light and featherweight tale which while nicely played and well shot, doesn’t raise up to anything less than interesting, if a little slow.

Caroline is a former dentist who has been forced to retire. At 60, she decides to use a gift that her two daughters have brought her, a trial period at a day centre where she can mix with fellow retire people and learn some new skills from drama to pottery to wine tasting. What she doesn’t expect is to become the object of affection from Julien, a computer teacher who is the same age as her eldest. Using the others as excuses to run off and see the young man, Caroline soon finds herself doubting if the affair is such a good idea, especially in a small seaside town where everyone knows her and her husband could find out.

The film starts with a very interesting, quick-edited opening title sequence that looks somewhat quirky and exciting and you immediately think this is going to be interesting, mainly for its approach to cinema. Yet once the titles are over, we settle in to the routine tale of an older woman suffering a late mid-life crisis with a younger man who seems somewhat relaxed about the whole thing.

Vernoux’s film follows the affair and the effect it has on Caroline, Julian and Caroline’s laid-back husband, Phillipe and this, I think, is where the problem lies. No one seems in the least bit shocked and emotional about the goings on. Caroline doesn’t seem torn about having a fling and seems to just accept it. Julian doesn’t seem emotionally attached to Caroline and Phillipe, instead of losing his cool, which most people probably would if they discovered their spouse was having an affair, instead goes for a wander, then goes to her to get her back. It’s all done in a very matter-of-fact way.

So to be drawn into the drama of the story, there needs to be, well, drama and this lacks it. There’s no tension, no big emotional sweep, not even a scene where a character raises their voice louder than their normal speaking voice and so you start to question the point of the story. In the end, it all felt a bit cold and detached.

What would have worked better would have been to concentrate on the patrons of the day centre, who all seemed so much more interesting and vibrant and yet we only get glimpses into their lives and skimmed across the surface of the stories.

Having said all that, the performances are very good. Patrick Chesnais as Phillipe, brings some well needed humour to his role as the jilted husband with a neat sideline of sarcasm, yet demanded more screen time. Laurent Lafitte as Julian is smooth enough to tempt the women and you can understand how Caroline is won over by him, with his Gallic good-looks and passion, yet with all the charm in the world, his part is written like he’s emotionally empty. 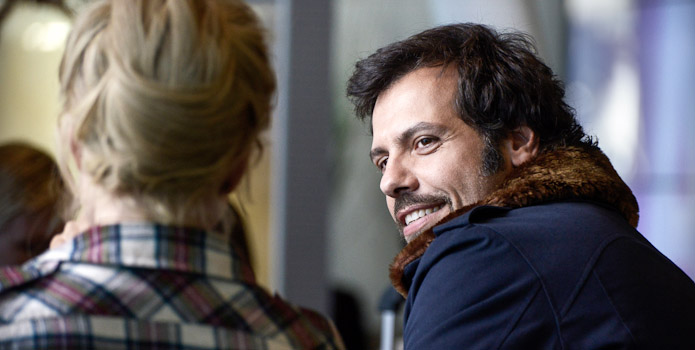 Finally there’s Fanny Ardent, acting royalty in France and you can see why. She is cool, smart, sophisticated and for a woman of her mature years, still unbelievably sexy. She does her best to make Caroline as accessible as she can and most of the time it works. Then there are moments when you seriously wonder why she is willing to give up everything she has worked at for a fling, losing that intelligence she obviously has.

The film isn’t terrible by any means and there are moments which work well but it’s the thinness of the plot and the lack of emotion that lets it down and while looking beautiful, it doesn’t challenge, doesn’t question and ultimately leaves you shrugging your shoulders like the main protagonists do.