What is the secret of happiness? That is exactly what Simon Pegg’s psychiatrist Hector needs to find out. Unfortunately in this rather smug and patronizing comedy drama, we never truly find out the answer, although director Peter Chelsom is determined to ram as many ideas down our throats while we go in a 2 hour travelogue with Pegg and some cameos. Let me just say, it didn’t leave me happy.

Hector is struggling with his life. A popular psychiatrist  who lives in London with his girlfriend, Clara, you would have thought he was the happiest man alive. Except he isn’t and he want to find the answer, in order to pass this information on to his patients. So with his backpack neatly full and his passport at the ready, he heads off to China, where he meets businessman, Edward, who pays for happiness, then to Africa to help out an old friend but comes face to face with danger and finally Los Angeles to see an old flame and a professor who claims to have the answer. But did he need to leave home to get what he wanted?

Based on a self-help book, this had the promise of being a nice, gentle feel good comedy with a likeable lead. Instead, Pegg’s character of Hector is actually not nice at all, even though he gives the impression of being nice. He doodles while his patients pour their hearts out, he selfishly leaves his girlfriend in London while he goes travelling, jumping into bed with the first woman he meets, he steals pens (admittedly by accident) and, in one slight offensive scene, gives the eye to an African girl while her family are in the room making Sweet Potato Soup for him. 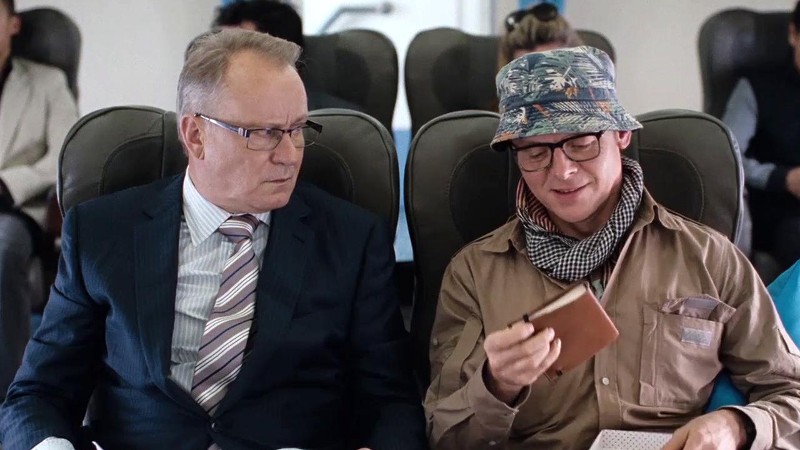 Throughout the film we get captions telling us exactly what has been said on-screen already, as if we didn’t get it the first time, here it is again. Each one telling us the secret to happiness. Except they aren’t really that secret and this is what is somewhat patronizing about the film. It thinks it is telling us something we don’t know and we must marvel at its wisdom. Yet there is no real answer, it’s what you want it to be, so don’t try telling us something else.

This journey is filled with stereotypes. Businessmen with money who don’t like anything that is beneath them. Asian prostitutes who pretend to be simple pick-ups in clubs yet have violent pimps, African families who do nothing but dance and sing. It actually becomes quite insulting after a while. Those it’s okay because kind middle-class doctor Hector is here to make life that much better.

All the time you are thinking, what is he so miserable about? Look at his apartment! He lives in the nicest place right over the Thames with a girlfriend who works of a pharmaceutical company and who obviously loves him, so much so that she will do everything for him. Oh and who just so happens to be Rosamund Pike!

In fact, she is about the best thing in this, even though it is a pretty innocuous character. She does manages to get some nice little moments, proving she can handle the lighter stuff just as well as the heavy dramas. Jean Reno pops up as a drug farmer in Africa but doesn’t even make a dent, while the great Christopher Plummer appears as a Professor with a neat gadget to measuring happiness but that’s all he really does is sits behind a computer screen.

I was wanting to really like Hector And The Search For Happiness. Instead I felt betrayed. It becomes boring pretty quickly and I spend most of the running time checking my watch (never a good sign). Those who liked Eat, Pray, Love will probably get a lot out of this. Those who hated Eat, Pray, Love will hate this because it’s almost the same film except without Julia Roberts. Not the worst film of the year but definitely the most disappointing.