Luc Besson is the king of nonsensical, popcorn fodder action films. He knows exactly what works to keep an undemanding audience happy: a story that edges closer and closer to bonkers; some well handled action sequences and leads who we know can do better and yet they throw their heart and soul into the film, as if it’s the last thing they ever do. Lucy ticks all those boxes and then some because this is Besson at his craziest.

Lucy is a girl in the wrong place at the wrong time. Forced to deliver a suitcase to the mysterious Mr Jang, she soon becomes a mule, having a bag of a new synthetic drug placed inside her, to be collected by more of Mr Jang’s gang at the end of the journey. The bag leaks inside her and soon Lucy finds the drug is opening her mind, unlocking its full potential. She needs to get to Professor Norman, a mind expert who is lecturing in Paris before her potential reaches 100%, being pursued by Mr Jang and his gang. What they don’t know is that the longer she is on the run, the stronger and more powerful she becomes.

Besson is a film maker who occasionally borrows left, right and centre from other films and other genre. This “alleged” sci-fi adventure seems to be have been heavily influenced by Neil Burger’s 2011 thriller Limitless, in which a man uses a drug to open his mind and makes him more powerful. Here, the difference is, Lucy doesn’t want to take the drug but the rest of the film follows similar grounds.

That’s not to say that Lucy isn’t fun. It does, however, become increasingly madder as it develops, leading to a finale that evokes 2001: A Space Odyssey via National Geographic. Having said that, it has elements of pure Besson that work extremely well and you somehow feel comfortable that he isn’t going all out crazy, that he can still deliver a tip-top action thriller that grips as well as entertains.

What holds this whole project together is Besson’s near perfect casting. If you want someone to deliver biological and all things cerebral, then Morgan Freeman is your man. He has a stature and a voice that makes even the less interesting things seem, excuse the pun, mind-blowing. It doesn’t stretch him as an actor but he is so right in the part of Professor Norman. Oldboy’s Min-Sik Choi is also perfect as the volatile Mr Jang, a drug baron who doesn’t speak a word of English throughout, yet is totally compelling. 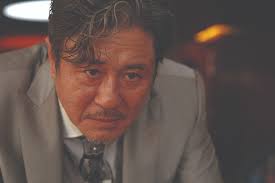 At the heart of the film is Scarlet Johansson in the title character. For the first twenty minutes, she is a force of nature, a woman on the brink of total breakdown, who is becoming all-consuming by her brain, leading to a more robotic performance for the rest of the film. This is not a criticism as she has that tone of voice which is perfect for that but she has a screen presence which captivates you and you find her almost hypnotic. She has proved time and time again that she can carry a film, whether it be drama or action based and so it would be brilliant if Marvel gave her a Black Widow film.

Lucy does get odder as it heads towards the ending and none of it makes much sense and you do find yourself wondering where on earth it is going but even if it does seem like it wants to answer the ultimate question of the meaning of life, it never comes close to finding an answer. Yet for 90 minutes it is utterly bonkers fun.