Written by: Nick Hornby and (based on the memoir “Wild: From Lost to Found on the Pacific Crest Trail”) Cheryl Strayed

On paper, Wild doesn’t sound like the most exciting of pieces –  “woman walks across the desert for 1,000 miles!” In the hands of the director of Dallas Buyers Club, with an interesting playing of time and a lead at the top of her game, this is a fascinating journey in the physical and emotional world. 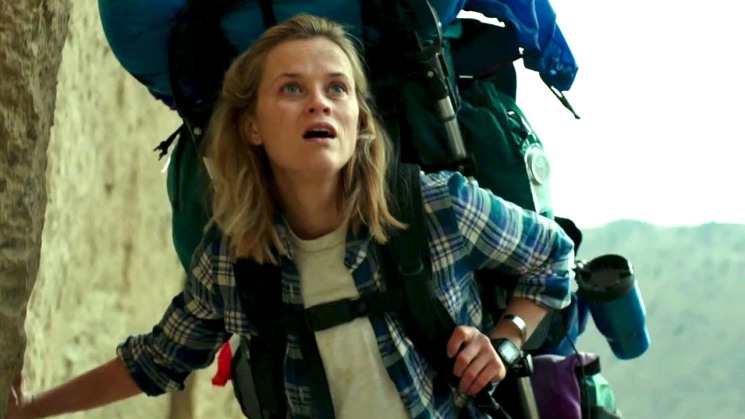 Cheryl Strayed is a young woman whose life has spiralled tragically out of control. Hitting rock bottom, she decides to find her true self again by embarking on an enduring yet spiritually healing journey on a known hiking trail across America.

It would have been very easy for director Jean-Marc Vallée to deliver a straight-forward tale of a woman walking from one end of America to Canada. Instead, he uses the thought process of Cheryl as part of the structure, So as the rambling, out-of-sync memories of this troubled lady flash  into her mind,  we are transported back to a particular period in her life, whether it be with her hippie-like mother, or the cheap one-night stands or her losing battle with drugs. Sometimes disjointed, other times coherent these flashbacks are reminiscent of the work of Nicolas Roeg. They artfully capture Cheryl’s deepest feelings and memories throughout the film and allow the viewer to experience her altering state of mind.

The cinematography was stunning, capturing Cheryl loneliness and isolation with some stunning scenery as she slowly marches towards her destination. Along with the imaginative use of editing, inter-cutting sequences of silence with an inner monologue, it is a visual treat. Another plus side to the film is the terrific soundtrack, with Simon and Garfunkel’s El Condor Pasa playing a pivotal part to the drama, as Cheryl meets a variety of people along the way, some comforting while others hold an air of mystery and danger.

While the film has more going for it than against, the film does falter towards the end and while the trip is treacherous, you never get the feeling that Cheryl was ever in any real danger and dramatically, it lurches rather than excites in places. It would have also been nice to have been given a sense of the distance traveled, maybe conveyed with long shots of her marching through the wilderness. These are just small quibbles in an otherwise surprisingly funny and inspirational tale.

As with Dallas Buyers Club, Vallée manages to get the best out of his leads. Laura Dern, looking more like her mother, Diane Ladd every day, still has that wild sparkle she displayed in the other wild film she starred in, Wild At Heart. As Cheryl’s energetic mother, she comes across more like a sister than a mother, yet that boundless enthusiasm is almost infectious and she is always a surprising and exciting actress to watch.

At the heart is Reese Witherspoon as Cheryl. Having been lost in her own personal wilderness for a few years, choosing projects that didn’t show off her talents, here she gives a towering and commanding performance as Cheryl. In almost every shot of the film, she carries it without any real difficulty, allowing us to experience her vast range of emotions, each delivered with skill. It is easily her best performance and hopefully will put her back on top where she obviously belongs.

Wild isn’t perfect but there is still enough here to admire. It’s a tough film dealing with tough themes, yet it excites and delights in equal measure. Vallée had a hard act to follow after the brilliant Dallas Buyers Club. I think he has managed to equal it. Beautiful, impressive and with Witherspoon, an actress who really demands our attention.