Winner of three Australian Oscars, including a tie for best picture (with The Babadook), Russell Crowe’s feature directorial debut is an assured and powerful drama centring on events after Gallipoli, in which the Australian army lost hundreds of lives during World War I. A film that could easily play as a companion piece to Peter Weir’s tremendous 1981 film about that very battle in Turkey. It’s that good.

Simple Australian farmer Connor, who has a knack for finding water, is a troubled man. After sending his three sons off to fight in Turkey, they disappear, believed dead. Connor, making a promise to his dead wife, decides to head to the scene of the battle to bring his boys home. Once in Turkey, he finds himself taking on the British Army, finding an unlikely ally in a Turkish Major and being taken in by the charms of a hotel manager and her young son.

The first thing to mention about Crowe’s luscious film is that if you may need the odd box of tissues with you, as this is an emotional roller coaster ride. Connor maybe a stubborn man but it’s that very stubbornness that keeps him going, refusing to give up no matter what the obstacle.  Without a handle of the language and finding himself facing hostiles, both foreign and friendly, Connor’s mission is full of danger and bureaucracy, yet nothing is going to get in his way. 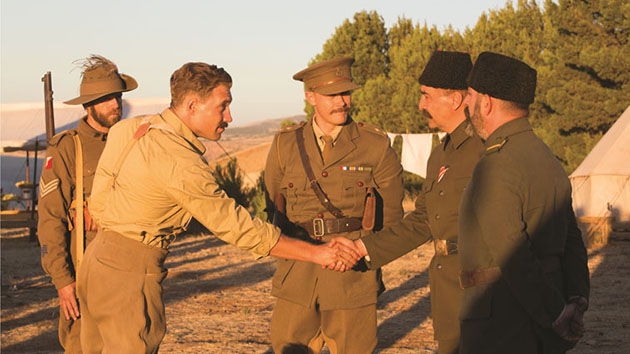 It’s a beautifully shot film, full of epic landscapes and an admiration for the scenery and architecture. It feels like a big film, in the same way that Lawrence Of Arabia is a big film. You won’t get that sense of majesty and splendour of Turkey if you watch this on your television. This is a cinematic movie, captured by the director of photography on Peter Jackson’s Middle Earth epics, Andrew Lesnie.

As the story progresses, inspired by real events, you long for Connor to find his sons, wanting the same men in charge who ordered so many soldiers to die, to just allow him the opportunity to embrace his cause instead of refusing visas and building barriers. At the same time, the parallel story of Ayshe, the young woman running the hotel which Connor finds himself in, is also beautifully craved out and handled.

Crowe the actor gives another quietly understated performance as Connor. You immediately feel for his plight, being on his side throughout. It’s a well-tuned performance that shows with the right material, just how good Crowe can be. Former Bond girl, Olga Kurylenko is perfect as Aysha, a woman haunted by her long-lost husband, trying her best to bring her son up while, at the same time, stuck with her husband’s brother, who wants her to be his, then finding confusion when Connor arrives on the scene.

The Water Diviner does have some dubious moments of editing, which sometimes seem awkward and out-of-place but this is a very small quibble in a film that is touching, sometimes exciting and always moving. Crowe shows plenty of talent as a director and it will be interesting to see what he comes up with next. In the meantime, this is a solid, confident piece of film making.