Written by: David Lindsay-Abaire and (based on a story) Steven Spielberg

Another day, another remake of a modern horror classic. This week, it’s the 1982 Steven Spielberg/Tobe Hooper chiller Poltergeist. It becomes apparent very early on that this remake only exists to get bums on seats by using a title that already has a reputation, because it doesn’t add anything or improve what has already been.

The Bowens are moving into a new home in a quiet suburbia. Father Eric is a frustrated unemployed while his wife, Amy, is waiting for that first book to enter her head. Their three children are not happy with the change in their living accommodation, although young Maddie is starting to have conversations with invisible people coming from the TV. It soon becomes apparent that the house is haunted with poltergeist and Maddie is stolen from the family.

Director Gil Kenan has taken the basic premise of the original and, well, remade it. While it’s not a bad film and compared to other remakes, it’s far more entertaining, he has added anything that would make it different or even improved on it. Instead, we get a similar family living through the same level of hell. We have the tree with a life of its own, the creepy clown and the portal where young Maddie is hidden.

What is different is the topical references. The 80’s version was a warning against television in the Reagan era. Now we live in a time of material things and so the film represents that along with the recession. Both parents are out of work, both struggling to make ends meet and Eric, especially, feels the need to use cling onto his position of power among his family by spending money he doesn’t have. This gives the characters an interesting twist and makes them human, which then makes the events that occur to them more shocking because we like them and understand them.

The other thing that made the original film such a classic was its grandeur. Spectacular lighting effects with Jerry Goldsmith’s powerful and emotive score dragged you into the drama, making things even more scary. Yes, Poltergeist the original is a scary movie. Whereas here we don’t have Spielberg’s eye for the cinematic. We don’t have a score that, while obviously there, doesn’t upset the balance of the picture. Instead we have a much smaller light show and a score that we don;t even know is there. Poltergeist was never just another horror film, whereas you feel this time, it is. 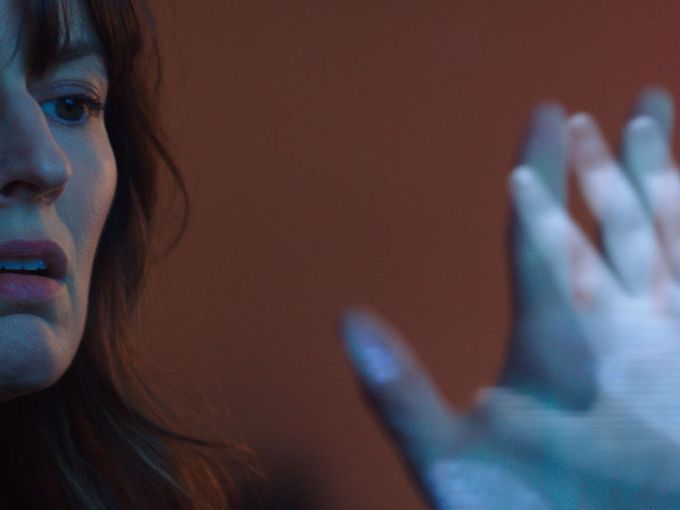 On the plus side, the performances are terrific for a horror film. Sam Rockwell, who I always rate as an underrated genius, has a knack of making every character he plays so utterly likeable. Here as Eric, with all his flaws, is an Everyman: a loving father, a doting husband, who only wants his dignity as the man of the house. In one of the quieter scenes, where he’s trying to buy a rodent trap, you feel his embarrassment as each credit card turns out to be cancelled.

Rosemarie DeWitt makes for a perfect balance with Rockwell as his wife, a much more in control woman than her husband. DeWitt has that caring, gentle look of a woman keeping it in control while all the time cracking up inside. The film scores high with these two and thanks to a decent script by David Lindsay-Abaire, allows them to develop. Something most horror films won’t allow.

The kids are fine with little Kennedi Clements having a similar look to the original Carrie-Anne and it’s always good to see Jane Adams on our screen, another underrated actress. Here she plays the paranormal doctor invited to first check out the house. If there is a slight misstep to the casting, it’s Jared Harris. As good as he is as paranormal investigator and TV celebrity, Carrigan Burke, he has a hard act to follow from the scene stealing Zelda Rubinstein in the 82 version.

Poltergeist isn’t a terrible film by a long shot. It has some decent jumps, even though it does rely on the quiet, quiet, loud school of shocks but it certainly doesn’t hold a candle to the original. If this wasn’t a remake, it would have been a good little horror but you cannot ignore the first film.

As a side note, the 3D version is utterly perfunctory and proof once more, that this is a fad that is there to rip audiences off.