There are some films that define description. You sit and you watch and you become absorbed by its splendour and beauty, marvelling over the performances and the wonder of the direction. And yet you come out somewhat befuddled as to what you have just watched. As if the past two hours haven’t really existed and you can’t quite put your finger on what you have watched and why you liked it so much. That is the experience of watching A Bigger Splash, an intriguing tale of love and jealousy that starts off as one thing and ends as another. 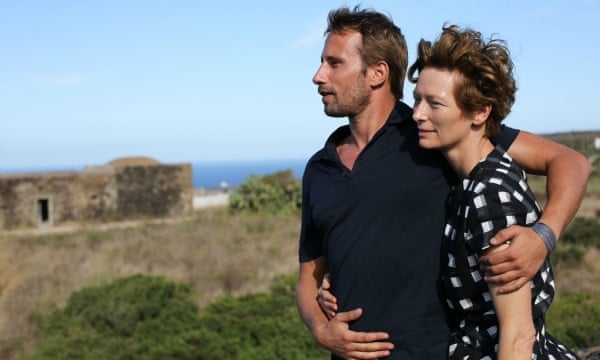 Marianne Lane is a rock star who has found solitude on a remote Italian island while she recovers from having throat surgery, spending a gentle, quiet time with her film making boy friend, Paul. The quietness is soon shattered by the arrival of her ex-husband and producer, Harry, a loud and over-energetic man who has brought with him a young girl, Penelope, who he claims is his 22-year-old daughter. The uninvited Harry soons turns Marianne and Paul’s world upside-down, destroying their quiet world into one full of passion, jealousy and death.

A remake of Jacques Deray’s 1968 drama, ‘La Piscine’, director Luca Guadagnino has delivered a beautifully observant film about how one person can upset the apple-cart, while at the same time, managing to capture the stunning scenery and hot temperament of the island retreat. This is, predominantly, a four-hander, as the two couples slowly find themselves intertwined with each other: Harry, still madly in love with Marianne, which seems obvious to Paul, producing a silent jealousy that slowly builds, while Penelope, the outsider-looking-in, seems to have her own agenda but you are never sure what it is.

This is a character study. A film about four people, almost trapped on the same island, and how they cope with each other. It bubbles slowly, like a pressure cooker, ready to explode at some point, which it eventually does. It’s a film full of secrets and lies, of hidden passions and, most of time, about what is not being said, instead of what is being said.

The film is equally infuriating as it is beautiful. Guadagnino gives us some delicious shots of the landscape of this island while throwing in random and somewhat unnecessary close-ups of objects that don’t seem to have any connection with the rest of the action. It also is full of continuity mistakes that often distracts from the story, which is a pity as this is such an intriguing tale and you need to focus.

The performances from the four leads are terrific. Each one bringing something different to the table and each one working wonderfully as part of the group. Dakota Johnson, being given much more interesting and diverse roles since Fifty Shades Of Grey, is good as Penelope, a woman who you are never sure what is actually going on in her head. More an observer than a participant, she often spends most of the film on the outside, away from the main action and yet her presence is always there. Matthias Schoenaerts is quietly smouldering as Paul, a man who refuses to show his true emotions, letting them bubble up inside.

The film’s real strength lies in Tilda Swinton and Ralph Fiennes. Swinton, as Marianne, is terrific, giving an almost silent performance as a glam-rock star al la Florence and the Machine/David Bowie, who has no voice. It’s a performance relying on facial expressions and emotions through the eyes. She manages to convey her feelings just in a look. On the other hand, Fiennes is allowed to go full-on over-the-top as Harry, a loud, enthusiastic middle-aged man brimming with the effects of a rock and roll lifestyle, with conversation twice the speed of sound and a boundless energy for life. It is probably Fiennes most outrageous performance which does include one of the finest demonstrations of dad dancing ever.

A Bigger Splash is funny, dark, emotional and shocking. It is a film not without faults but one that you can forgive because it is a classy affair. I still don’t fully understand why I liked it so much. Maybe I never will know. Let’s say it’s a film worth your while and maybe you will get something else out of it.