Written by: Peter Landesman and (based on the GQ article, “Brain Game”) Jeanne Marie Laskas

At this time of the year, a whole batch of films come out that are all hungry to be recognised by some academy, mainly hoping for a golden statuette to sit on a mantlepiece. some films manage to impress enough people for a nomination or two to go their way. Others simply don’t make the grade and fall to the wayside. Concussion, sadly, is the latter. I say sadly because the basic premise is an important story to tell. A true David versus Goliath battle. Yet with a big star name in the lead, on the best form he has been in years, the rest of the film is so heavy-handed and laden that you can understand exactly why it hasn’t made the grade. 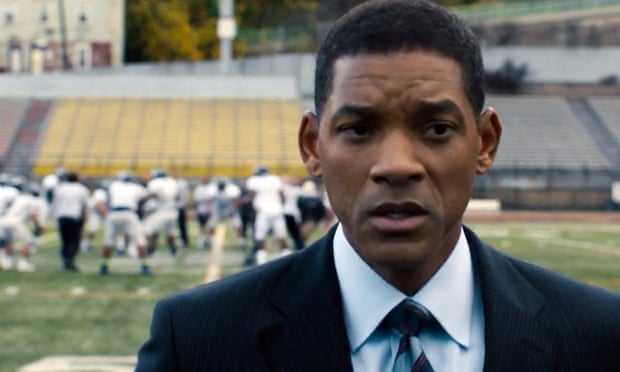 Legendary football star Mike Webster has died. A former superstar of the Pittsburgh Steelers, his last days were spent as a tramp sleeping in a truck. How did someone in his position, revered by everyone, end up in such a sorrowful state? Accomplished pathologist Dr. Bennet Omalu, believes that there is a connection between concussion and the death of Webster. Looking deeper, he soon discovers that continuous blows to the head during NFL games could lead to life-long damage, resulting in either unnatural deaths or complete mental breakdown. The only trouble is that the NFL doesn’t want that information to be shared.

Based on an article published in GQ magazine, writer and director Peter Landesman has a solid, powerful story on his hands. A story of how hundreds of former players of American Football could be in danger of losing their lives because of using their heads as battering rams. Yet what Landesman does with this material is turn it into a star project, concentrating less on the actual story and more on the central performance and his life.

Not saying that Nigerian born, academically brilliant  pathologist Dr. Bennet Omalu isn’t an interesting subject for a film but learning about his relationship with a young woman detracts from the real heart of the film, which is his battle for the NFL to recognise that there is a serious problem with the game. When it is dealt with, Landesman’s script and his direction is hugely melodramatic with an emotive score and scenes of intense dialogue that really amounts to nothing.

Which is a pity when you compare it to something like Spotlight, which handles a very difficult subject matter with respect and subtlety, Concussion attacks its subject with a bombastic nature that after a while it loses its impact. This is a film that is clumsy in its delivery and relies far too much on its star to carry the weight. So instead of really feeling for Omalu when he is refused entry into a meeting with the NFL, we get a post meeting stare-out as Omalu hears the verdict  of the meeting, accomplished by wailing violins, instead of silence.

The rest of the characters seem flat and stereotypical. People we have seen in hundreds of movies before. The heads of the NFL all come across as sleazy and self-important. A shot of a meeting shows aging men around a table looking serious comes across more like a meeting of the Mafia. There are only two female characters, one as the partner of Omalu who doesn’t get much to do at all but dote on the doctor and Omalu’s assistant, who doesn’t get much to do but dote on the doctor.

Thankfully the performances are solid. Interesting that the three main leads are more use to playing comedy, that they bring some colour and light to the heaviness. Albert Brooks gives a typical Brooks performance, making me remember how great he was in Broadcast News, as Omalu’s boss, while Alec Baldwin proves once more that even with ropey material, he can still deliver. Faring less favourably is Brit Gugu Mbatha-Raw as Omalu’s partner, who seems only to be there as a prop in order to praise Omalu at every conceivable moment.

As Omalu, Will Smith has to carry the film. He has always been a strong screen presence and here he has to really shine. Luckily he does. At first it’s hard to hear his Nigerian accent without wondering if it’s too much, yet as the film progresses, we get less of the usual rifts and beats we come to expect from Smith and more a fully developed character. It’s a great performance in a soapy movie.

His performance has been spoken of as part of the reason the recent Oscar spat has occurred, where stars are accusing the Academy of lacking in diversity and equality. There are obvious problems but not giving Smith a nomination isn’t the cause. It’s a good performance but it comes at you like he should be wearing a sign round his neck saying “Please nominate me!” In fact the whole film plays out like a two-hour Oscar consideration.

Concussion should have been a shocking piece of cinema. Instead it plays too easily into the Hollywood “issue” drama. Approached with more care and attention to the story and this could have been the big Oscar contender. Instead it’s a film where the facts may be awful but we care very little, playing out like an extended soap opera. I should have been shaking after seeing it, like I was after viewing Spotlight. Instead, I couldn’t wait for it to be over.