Who would have thought that the biggest joke of the 1988 Winter Olympics would become the basis of a feel-good triumph? That is exactly what has happened to the story of Eddie Edwards, a man with a dream who refused to listen to anyone and managed to become an overnight sensation for being bad. In the hands of actor turned director Dexter Fletcher, he has given us an unmitigated treat that will leave you with a grin on your face and spring in your step.

Eddie Edwards is a small boy with a big dream: the Olympics.  After failing at every sport he attempts, he soon finds some talent skiing. Yet as a young man, he doesn’t prove himself even close to the standard of the Winter Olympic team, he finds a sport that no Brit has really succeeded in ski jumping. Taking him out to Germany, he throws himself, literally, into the sport, getting the attention of former US ski jumper Bronson Peary. Forming an unlikely partnership, Peary agrees to train Eddie and take him to the 1988 Winter Olympics.

This dramatization of Eddie’s now legendary journey (as the real Eddie Edwards has reported, only about 10% of the film is based on fact), it starts off like a lighter version of Billy Elliott, with the back streets of northern England and Eddie as a young boy running around the alleyways, you do get the feeling that this is going to be a cheese-fest, full of obvious clichés and false emotions. Yet what Fletcher does is inject plenty of fun in the story, with moments of real peril to spice things up.

The sequences during Eddie’s practice, where the fearless young man takes on the larger jumps as filmed from his point of view and you get a sense of the height as well as the impending doom that her faces. Yet at the heart of this joyous celebration of life’s underdog is an odd couple relationship.

Edwards and American Bronson Peary couldn’t be so different. The milk drinking, never quit attitude against the hard-drinking, couldn’t-give-a-damn attitude of Peary.  Even though they shouldn’t work as a team, they do, injecting enough humour to make you smile, while never being too mawkish and sentimental. You believe that they could actually be friends, even if they don’t. 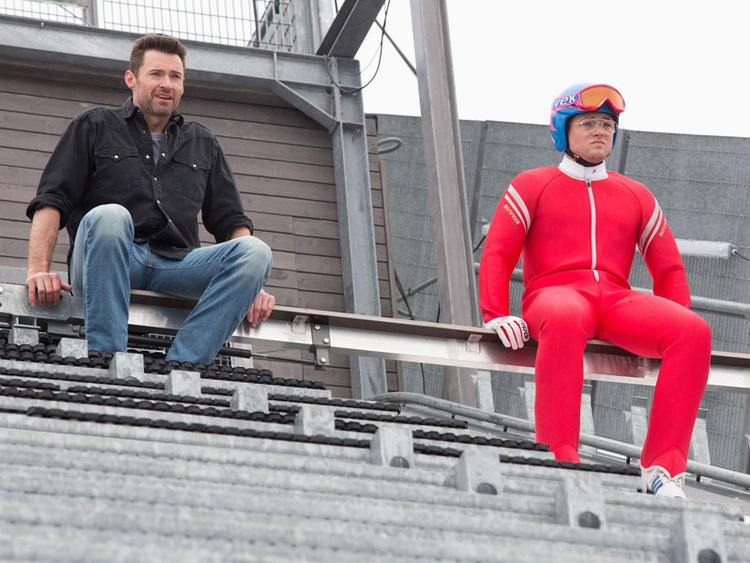 The strength is played out by the screen’s best new comedy team. Taron Edgerton, who made such a huge splash last year in Kingsman: The Secret Service, is superb as Eddie, with his awkward persona and almost uncanny resemblance to Edwards, even if things do get a little bit wiggy in places. He makes Edwards not only a sympathetic character but gives him enough bravado and spirit to instantly warm to him and want him to succeed, even though we know the outcome. Hugh Jackman, probably the most unlikely star to appear in a film like this, allows us to see the side we see when he is off-screen. Forget Wolverine or the other all-action roles, this is a man full of sarcastic comments and choice asides. He is hilarious. Partnering him up with Edgerton and the screen just ignites.

Eddie The Eagle is the kind of film that follows in the tradition of Billy Elliott, The Full Monty and Calendar Girls, those eccentric Brits who refuse to be put down or give up. No matter what is thrown at them, they are determined to succeed. It’s a feel-good delight from start to finish that, no matter what mood you are in, you will leave the cinema with a  warm and triumphant feeling inside. 100% pure entertainment.