Written by: Justin Marks and (based on the book) Rudyard Kipling

Going into the “live-action” remake of The Jungle Book, I was a little anxious. The 1967 Disney animation is, by far and in my opinion, the best the studio ever produced, so watching a modern reboot for a new generation filled me with fear that we could be in the realms of Maleficent, where the story we know and love has been turned on its head. After five minutes, I relaxed, my anxieties soon faded away because this is a lovingly faithful, gloriously magnificent and jaw-droppingly beautiful film that blew me away!

Mowgli, a man-cub raised by wolves, is forced to leave the jungle after a threat by the tiger Shere-Khan. Protected by his guardian, Bagheera, and leading him to a village where human lives, Mowgli encounters a collection of characters and adventures including befriending a bear, Baloo, a gigantopithecus and the continuous fear that Shere-Khan will be waiting.

Let’s start with the look of the film. Over 90% of the film is CGI, including the jungle world as well as the animals. Keeping that in mind, this is a triumph of technology. The attention to detail is incredible. A sequence near the beginning in which the jungle creatures come together to drink water will have your mouth opening in wonderment. Not only have they managed to give each animal its own characteristic but little things like insects darting around and the scenery from the mud to the mountain views are breath-taking.

Then there is the storytelling. Director Jon Favreau, who has come a long way since Swingers and who was responsible for the first two Iron Man movies, and writer Justin Marks, have an obvious love for the source material, both Rudyard Kipling’s books, and the Disney classic. They haven’t played around with the story, taken it from another angle or even introduced characters that don’t belong. Instead, they have given us a faithful retelling with the occasional twist and turn that enhances the work instead of ruining it.

We get a film brimming with peril, excitement, comedy, that never once wanders into saccharine schmaltz but swallows us up and engulfs us in a multitude of emotions By the end, you are rooting for the hero and you are shedding a tear, not through sadness but because you have become so involved with the story telling that it touches you. 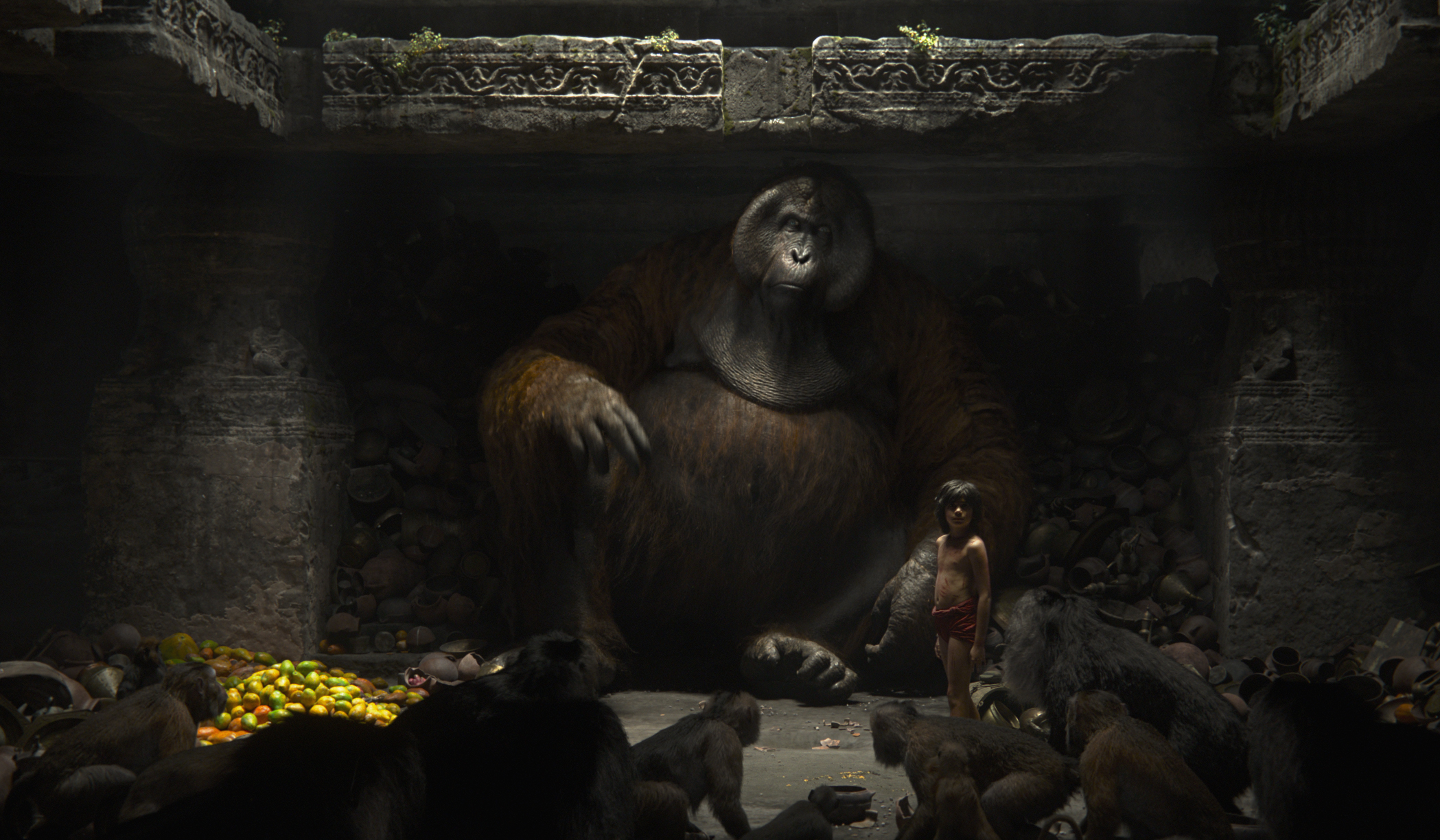 Those of us who yearn for the original are also in for treats galore, with a musical score that often includes the songs from the animation. Then just when you least expect it, we get bursts of the favourites and a slight re-working of I Wanna Be Like You, which actually do not intrude or interrupt the proceedings, they sit quite comfortably in an otherwise full blown adventure.

Voice-wise, the talent is there to be seen. Bill Murray was born to be Baloo, a gruff, sarcastic attack that reminds us of the great Phil Harris, and yet has that distinctive Murray delivery. Laid-back, droll and very funny. Ben Kingsley adds a depth of superiority to Bagheera while Scarlett Johansson’s Kaa the snake is perfectly hypnotic.

Christopher Walken’s King Louis, no longer an orang-utan but an enormous gigantopithecus, with his introduction more in keeping with Marlon Brando’s Colonel Kurtz in Apocalypse Now, with his bizarre opening speech about papayas, is a blast both visually and verbally, as he swoons his way through the new version of the Disney jazz classic. The winning voice has to Idris Elba as Shere Khan, who is just pure evil and has produced one of the great villains of the year. Tough, authoritative and impressively powerful.

What is the most remarkable thing about this wonderful movie is young Neel Sethi as Mowgli. Remembering that he was acting opposite green screens and very little else, he is a revelation. His mannerisms and facial expressions are as close to the animated Mowgli as you could get. There is one moment when he pops his head up from behind a sleeping Baloo and you immediately are taken back to that inquisitive young cartoon character. A true talent to behold.

I cannot recommend this film higher. It is breath-taking, charming, exciting and just a joy. Even the closing credits, which include pop-up versions of the characters, are worth sticking around for. Disney has done wonders and while the original still has a place in my heart, this was one film that I could have quite easily watched again straight after seeing it. I became a child again and was lost in an amazing and magical world. Go and be mesmerized. Really, trust in me!