When Finding Nemo was released back in 2003, Pixar changed the face of computer animation overnight. With it’s glorious colours and detail to life under the sea, capturing the water world magnificently, as well as warming everybody’s hearts with its touching tale of a father’s desperate search for his missing son, it became an instant classic and a favourite among the company’s vast collection of movies. So will a long-awaited sequel do what the original did and will it be as ground-breaking in its animation?

One year after the events in Finding Nemo and Dory, the fish with short-term memory loss is starting to remember things, particularly about her family, who she lost years before. Determined to find them, she, along with Marlin and Nemo, head off to California where they get separated. Dory finds herself in the Marine Life Institute, where she meets an octopus called Hank, who is willing to help her if she helps him escape from the place. Meanwhile, Marlin and Nemo have to get in to find Dory.

The plot for Andrew Stanton’s sequel is very familiar. Instead of trying to find Nemo, it’s Dory’s turn to take the limelight and the search is for her missing family. It introduces us to an array of brand new characters and a series of misadventures for the likeable fish we all know and love. But this is Pixar and when you think it’s being all comfortable, it throws the odd hard punch and in the tradition of all great Pixar movies, one moment you are laughing, the next you are fighting back the tears.

The team tells the story through a mix of present-day and flashbacks, where we get to meet a very young Dory, all giant eyes and bewilderment. It is these scenes where the film really triumphs. The tale of a mother and father trying to protect they young, teaching them the ways of the world while understanding that she may never remember, will have you crying in your popcorn. Pixar does it every time and they delivered once again here.

Sadly, the story does take a very unusual change of direction come to the final act with a sequence that, even for a fantasy film like this, where all sea life talk, does not sit right and, for me, slightly spoilt it. It was as if Stanton and co-writer Victoria Strouse were struggling to find a solution to the adventure.

This, however, is a minor blip for a film that you spend most of your time wide-mouthed and in utter wonderment. Did Pixar push the bar up once again in the animation stakes? You bet they did. This is jaw-droppingly incredible. They have managed to create 3D characters that genuinely look like you could pull them out of the screen and hold them. The attention to detail is still there, none more so than when Dory finds herself in an aquarium full of sea life, but Marlin, Dory, and Nemo just look so real. If anyone is going to finally make a 3D movie without having to wear glasses, it is Pixar.

As for the characters and voice talent, as usual, they are spot-on. Ellen DeGeneres has the kind of voice that can make you laugh while is sincere enough to really sympathise with. As Dory, she manages to balance comedy with pathos brilliantly. Ed O’Neill is terrific as Hank, while Idris Elba and Dominic West almost steal the film as seals with an obsession for a rock. 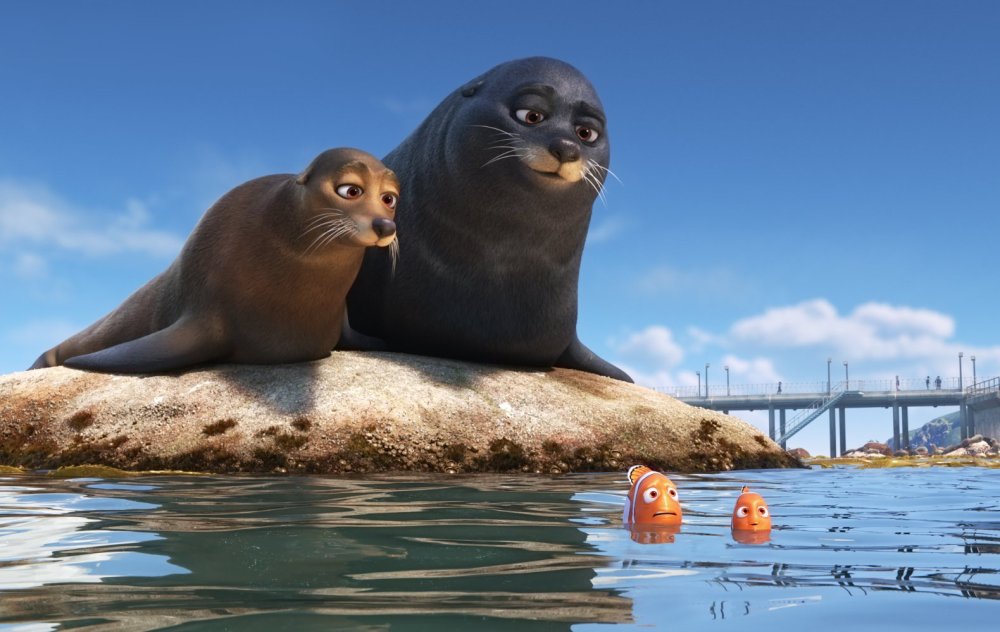 I kind of feel cheated a little. This was a 5-star movie, thanks to the magnificent animation and the treatment of the family relationship plus some very entertaining new creations. It’s just a shame it had to end so, well, bizarrely. Still, it is well worth seeing on the big screen and be amazed by a team that seems to understand how to create proper cinematic stories that make, even the most cynical of reviews, revert back to their childhood.

A point of note: get there early to catch the beautiful short, Piper and stay until the very end of the credits for a funny short additional scene.