I am in shock! After a host of movies with the word “Bad” in front of it that basically sums up the total package, I can report that Bad Moms manages to break that habit, in that fact that it is not terrible. It is not perfect by a long shot but this isn’t the movie that you think it is going to be from the trailer. Yes, it’s brimming with sexual references and countless uses of the F-word but at the same time, for all its crassness, it has plenty of heart.

Amy is struggling to balance a life where she has thrown out her husband, has to make sure her two children are okay with schoolwork and after school activities while working for a coffee company and coping with the school’s PTA and it’s dominant leader, Gwendolyn. Then things finally snap and she finds herself in a bar with an overbearing mother, Kiki and couldn’t-care-less mother, Carla. The three women decide to break the system and become bad moms, leading Amy to take on Gwendolyn for the top job at the school.

Writers and directors Josh Lucas and Scott Moore, the guys behind the Hangover movies, have taken a formula that has slowly become tiresome and unfunny: three people who decide there’s more to life than their lives and so go on a sex, drugs and drink binge whilst behaving very immaturely, as the trailer leads you to believe. Yet they haven’t. Yes, there are elements of that within the film but this is more about mothers who cannot cope with modern parenting and the pratfalls that it brings.

It soon becomes apparent that this is more about the battle lines are drawn between flustered, overworked, undervalued Amy and her nemesis, extremely rich and pompous Gwendolyn and the control she has over the school. If Gwendolyn says something happens, it will. So when Amy annoys the PTA President, she immediately has Amy’s daughter benched from the school soccer team. It is this power struggle that brings out the real heart and soul of the picture.

Up till then, this has Amy and her two new buddies letting loose and becoming exactly what the title tells us. They run riot in their local supermarket. They believe in the great god of wine and they go out of their way to get Amy a man other than her internet cheating husband. There is also the “party” scene in which the school moms go to town on wine, with loads of slow-motion shots of dancing, over indulging in alcohol and urinating in the garden. Yet while it is not as gross-out as some films of this nature, the one thing it does is genuinely make you laugh. Not huge, belly laughs but laughs nevertheless. 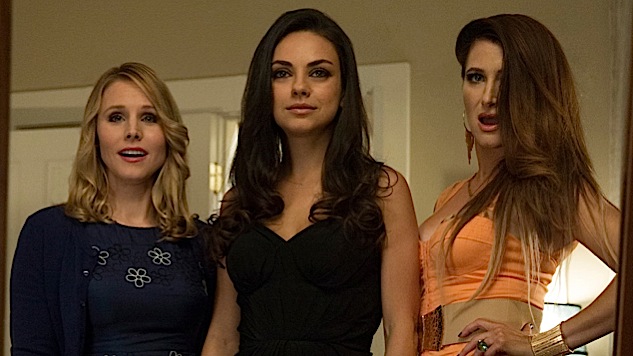 The cast does a grand job making sure the material works. Mila Kunis as Amy doesn’t always look as harassed as we are let to believe but she brings an air of believability to the more serious moments that make this film a step up from the norm. Kristen Bell is a perfect foil to the bad behaviour, never going too far with the outrageousness as she is the mother with a sexist husband, four kids who she believes come first to everything and so has left her friendless for many years. Christina Applegate as Gwendolyn takes her Anchorman persona and goes full bitch with it while throwing in a real curveball by the end that turns her from a comedic character to human.

Bad Moms isn’t hilarious and it has plenty of faults, like the overuse of slow-motion to a pappy pop soundtrack but compared to the spate of comedies like this, this is miles more fun. The ending is both touching and charming and stay around for the pre-credits sequence which, for once, isn’t outtakes that are funnier than the film but some very moving memories from  the mothers of the female cast. I went in with very low expectations and I was pleasantly surprised. It won me over.