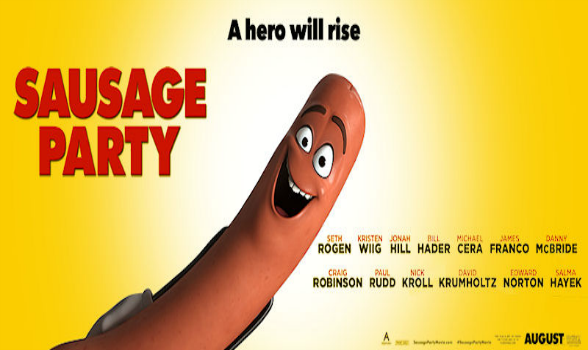 There seems to be a lot of excitement about Sausage Party. An adult animation which children definitely shouldn’t see. This is not a new thing. Back in the early 70’s we had the likes of Fritz The Cat and Heavy Traffic, which were certainly not for young eyes and pushed the boundaries of animation away from the usual Disney traditions. Seth Rogan’s latest, which has a host of his celebrity buddies voicing the CGI characters, isn’t a million miles away from those Ralph Bakshi films, just managing to more to push the boundaries of good taste. If you don’t like watching food having sex, you may want to avoid this.

Shopwell’s Grocery Store is the home of eager and excitable food, all waiting to be chosen by the Gods (humans) to be taken to the promised land beyond the supermarket doors. They believe that they will experience a heavenly new life if placed in a trolley or basket. Frank, a sausage, has dreams of a lasting relationship with a bun called Brenda. Their chance comes when they are both chosen but an accident occurs, leaving them behind in the store while their friends are taken to the outside world. What Frank soon discovers is that life is not as rosy as everything thinks and once picked, they could be heading for total doom.

It is universally known that I am not a massive fan of Seth Rogan and his very low-rent humour, so going into this, my heart sank. While it is exactly as I expected, what did surprise me were that there was the odd occasion when I did laugh and that this wasn’t as painful as I was expecting. Don’t get me wrong, it’s not great. It’s just not as bad as I thought it would be.

There are moments when this foodie variation of Toy Story does hit the mark. There are jokes about the Arab and Jewish conflict, played out by a Jewish bagel and a Muslim falafel. There is the odd poke at Pixar (particularly a bumper sticker exclaiming “Dixar”) and puns aplenty about food and other home comforts (a joke about toilet paper, for me, was the biggest laugh). Even Saving Private Ryan gets its own joke, which is one of the film’s highpoints. So on a scale compared to other Rogan movies, this was a laugh-fest. When I say I laughed, more like smirks and chuckles but that’s it.

Yet these laughs are often off-set by the crassness of the rest of the humour, where the F-bomb (and worse) are the kings of comedy and political correctness is thrown out the window in favour of stereotypes, misogyny and gutter humour, which is a pity because when it’s clever, it’s fun but when it resorts back to the usual Rogan film, it becomes a little dull.

Having sat through so many of these comedies now, the shocks have become tiresome, so the finale isn’t so much offensive but more out of place. It feels like an afterthought because up to then, this has moments that genuinely work but if you have seen the works of Bakshi or Team America, this just looks unimaginative, which is a pity.

Sausage Party is not the total disaster I thought it would be and I am pretty sure that it will clean up at the box office. Yet from the reaction of the audience I saw it with (and it was pretty full) I got the impression they wanted more than just potty mouths and sex jokes because, like me, they were laughing at the clever stuff. Shame there wasn’t more of that.