One thing that surprised me about watching The Founder was that McDonald’s allowed the film to be made. The reason being that it doesn’t paint an exactly perfect picture of founder Ray Kroc, the man who took a simple business idea and turned it into a multi-million dollar corporation. In fact, John Lee Hancock’s film portrays a man willing to be ruthless and to stab anyone in the back in order to make his own American dream. What’s also surprising is the similarities with The Social Network, so if it could work for Facebook… 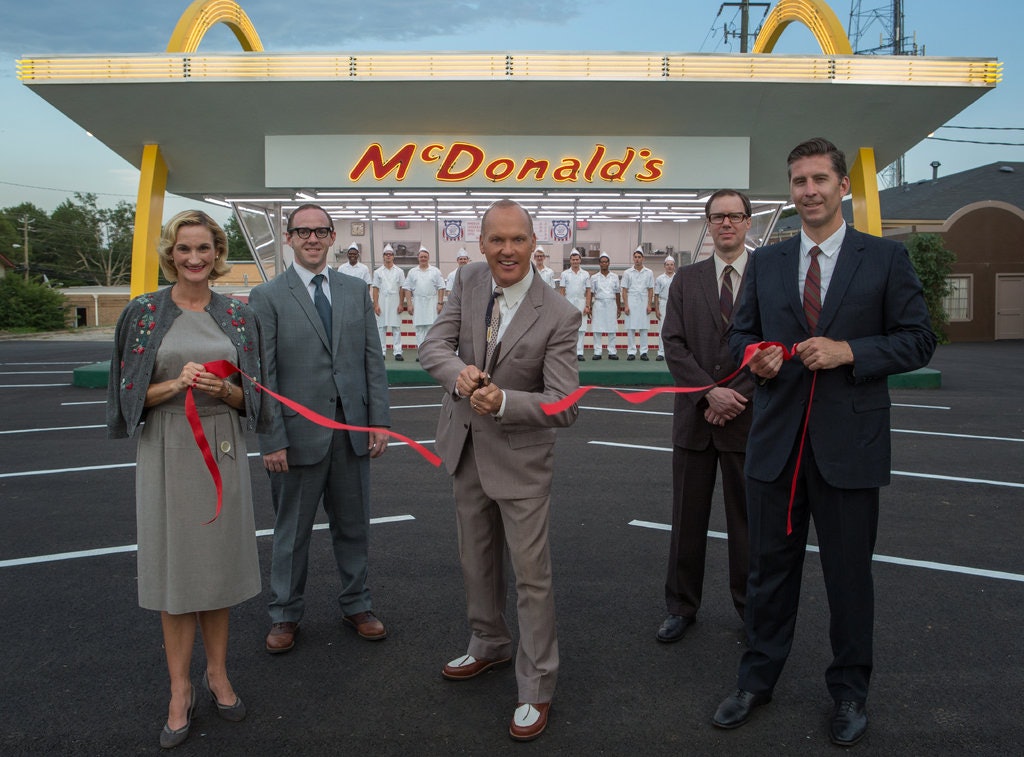 Ray Kroc is a failing salesman in 1950’s America, travelling around drive-throughs trying to sell the owners’ milkshake machines. When he receives a huge order from a small burger bar in Los Angeles, he heads out to see why they would want so many. He comes across the McDonald brothers, Dick and Mac, who have found a way of creating the perfect burger joint, selling perfectly made meals at great speed. Ray, seeing a future for this, persuades them to join forces and create a franchise. What the McDonald brothers don’t realise is that Ray’s dreams are big and they don’t seem to be part of them.

While Hancock’s direction may seem very pedestrian and workmanlike, never being too showy or creative, what he does allow is the story to do the work. The fact that this is a film about the small beginnings of a huge business might not sound too tempting, especially as some may feel it’s just another two-hour advert (although McDonald’s don’t seem to have too much interest in the film, unlike their own movie classic, the truly awful Mac and Me), this is more about business and how savage it can be than about the company.

Following the path of Kroc, you start out on his side. A struggling salesman who sees an opportunity and, as his self-help record tells him, he persists. Where the differences lie between him and the brothers is that they seem to lack any real ambition in life, instead choosing to stay in their safe haven with one store, whereas Ray can see a much bigger picture and goes for it. Where the film scores highly are following that same man as power and greed start to kick in and his total lack of respect for the real founders of the company. It could have been really easy for Ray to take the brothers along for the ride, yet he decided to take all the credit and the business at the same time.

Even by the end of the film, when we get to see the real Ray Kroc speaking, you can see a man who genuinely believes he came up with the concept and, in that short sequence, the name of McDonald’s. Ruthless to the very end.

The core strength lies in finding someone who can pull of likeability to a role of a man willing to kick those who are down. Michael Keaton just seems such an obvious choice and he storms the film with a superb performance, allowing him to be the fast-talking, smooth operator that made him famous in the first place (see his debut in the forgotten comedy gem, Night Shift) to almost a shark unwilling to accept the way in which the brothers want to work. It’s a masterstroke of casting. Nick Offerman and John Carroll Lynch are also good as Mac and Dick. Offerman, the business brains behind the pair, who can see Ray taking them for a ride and yet seems powerless while Lynch is the more gentle of the two.

The Founder is a fascinating film that somehow seems quite relevant to the times we are living in, especially in the world political spectrum. It’s full of great details of the time and with a terrific central performance from Keaton. Sadly I fear it will be lost among the other strong Oscar-nominated dramas out there and won’t properly find the audience it deserves. If you do manage to catch it, it’s will be worth the watch.