It is no surprise that when Christopher Nolan has a new film out, the cinematic world goes crazy. He is one of the few directors out there who are willing to push the art form, to understand that movies are far more than just images on a screen, that audiences are far more intelligent than most other directors out there are willing to give them credit for. Apart from the blip of taking them one step too far in Interstellar (that strange, head-scratching final act may have been too much), Nolan’s work has been impeccable. Dunkirk is certainly that. In fact, it’s pretty close to being a masterpiece.

With the Germans closing in on British and French forces on the beaches of Dunkirk, the chances of getting 400,000 men to safety is almost impossible. The navy don’t have enough ships and the ones that they do send are being sunk as soon as they leave the harbour; the sir force refuse to send any planes to tackle the problem because they fear an attack on Britain and so the navy turn to local sailors and fishermen to travel to the French coast in order to help with the rescue.

Told from the point of view of three separate stories and in different timelines: three young soldiers desperate attempts to escape the beach, an ageing yachtsman with a sense of duty to go to France and bring back some soldiers and the Spitfire pilots sent to take down the German air force but with limited fuel and with only three planes against bombers and fighter planes. Nolan then does something quite remarkable. Returning to his Memento days of twisting and turning time, he tells these tales over one week, one day and one hour, but never in that order.

It does take a little time getting used to but once you do, you are drawn into a horrific world where the chances of survival are slim. Based on the real life events, Nolan uses all his cinematic skills to tell the tale of heroics with a mix of sympathy and tension. Aided by some superb cinematography and a score by Hans Zimmer that captures the nightmare these young men had to live through, it grabs you from the very first scene, in which we are first introduced to one of the main protagonists, Tommy, a young soldier escaping gunfire from the German army, only to find himself trying to get off the beach before his life is taken.

We follow his journey, along with fellow soldiers Gibson and Alex, as they try to leave the beach they seem eternally stranded on. We then meet Mr Dawson, a weekend sailor as his small yacht has been by commissioned by the navy to help in the rescue attempt. Finally, there’s Farrier, a Spitfire pilot taken on the might of the German air force without a clue as to how much fuel he has. 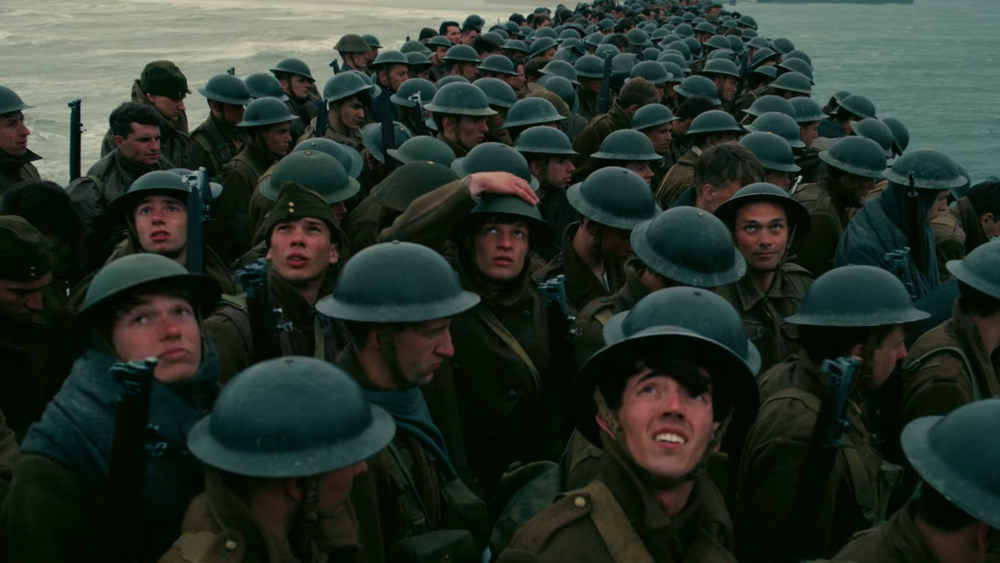 Nolan weaves his way through these stories like a master, all the while managing to do so with very little dialogue. This is like watching a silent movie made up of sound and music. All the while and this really is noticeable if you see it in a cinema with great sound, the ticking of a clock playing almost constantly. It’s when the timelines start to merge that you really understand just what a genius Nolan is.

The performances from the exceptional cast are all excellent. This is a film not made up of stars but of star performances. Virtual newcomers Fionn Whitehead and One Direction’s Harry Style are terrific, conveying perfectly the fears of young men who really shouldn’t have to face the horrors and nightmares of living through war. The more experienced cast: Kenneth Branagh, Mark Rylance, Cillian Murphy and Tom Hardy, all deliver quite brilliantly in a film that more than just good actors chewing up the scenery.

Dunkirk is a harrowing, beautifully crafted and expertly imagined piece of cinema that other filmmakers should watch and study and come away, saying, this is how a film should be made. With care and attention to detail as well as telling a story so powerful that it will probably stay with you long after the lights have come up. An Oscar contender for sure, this is possibly the finest film you will see all year. Yes, it’s a masterpiece.