Do you remember Flatliners? The 1990 Brat pack movie about junior doctors wanting to experience life after death with Keifer Sutherland, Julia Roberts and Kevin Bacon? Well, someone must have enjoyed that movie so much, they thought we needed a second version and so, 27 years later, we now have the imaginatively titled Flatliners! A film that we are not sure is a reboot or a sequel. In any case, this was a movie that Columbia Pictures decided not to press screen, so immediately you are signalling a disappointment of some description.  They weren’t wrong.

Courtney is a medical student who wants to push the boundaries of her studies by exploring the possibilities of what happens once we have died. With the reluctant help of her fellow classmates, she asks them to stop her heart for a minute and then to revive her. Once returned, Courtney seems to have unlocked something in her head that restores her memories and she becomes a much stronger student. The others, fascinated in her trial, all want to be flatlined. What they don’t realise is that once you have died, you bring something else back with you.

The major problem with the original film version was that it was style over substance. Looking more like an 80’s pop video, director Joel Schumaker was more concerned about his casts mullets than in the overall contents of the film, which was so ludicrous and ridiculous that the whole film, while mildly successful, is looked upon more as a curiosity than a gripping thriller horror. Which brings us to the new version and hopefully the problems with the old film can be ironed out. They can’t.

The premise of allowing someone to die in order to for them to experience the white light effect is so mind-numbingly stupid that you immediately think anyone who tries it deserves not to come back. So we witness four of the five students all going through the same motions all in the interest of science, or more to the point, their own personal longings, which causes a cinematic problem immediately…the lack of tension within these scenes. Once one has gone and has been brought back, we get a repetition of the same thing, giving us that feeling of “seen that, done that!”

Director Niels Arden Oplev, who gave us the original The Girl With The Dragon Tattoo, is a fine filmmaker. Alas, here the material is so bad, even a strong director like him struggles. The film doesn’t go anywhere, doesn’t say anything. Once we have been through the death experience, it changes suit and becomes a horror but without the scares. The individuals start seeing images of things from their past that have come back to haunt them. We get the stock “Boo!” type of horror that I have become increasingly bored with. The problem is, we don’t care enough about the characters to feel they are in any real dangers and when we finally reach the finale, it becomes almost laughable that the word “sorry” will stop the hauntings!

The dialogue in this film is terrible. We get pointless lines of explanation. We see two of the characters who have died and come back, having a hale stone fight(?) while the others, watching from the sidelines, comment “it’s almost like they are in sync with each other!” Another time, the glamourous one asks the man she has just slept with “What do you see in me?” Take a look in the mirror, lady and you’ll see what he sees in you!

Even the talented cast seem bored with the whole thing. Ellen Page, who we know is exceptional (just watch Hard Candy and Juno to see that fact) doesn’t even seem to be trying, while Brit James Norton, who has been in so many terrific TV dramas, has to put on an American accent (why?) and is the love ’em and dump ’em cad! Keifer Sutherland pops up, begging the question is this a sequel, and looking like Michael Douglas. While the rest of the cast just look bored. 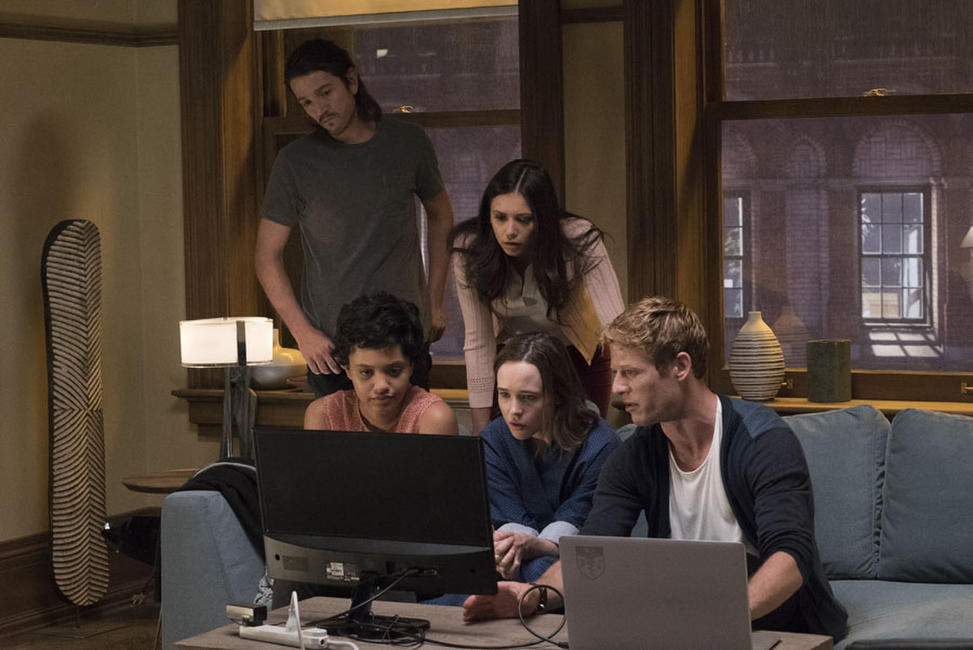 Flatliners looks good but the problems with the first film still haven’t been sorted. It’s a ridiculous premise that neither grips or shocks, it just exists and the only reason for this film to be allowed out on the public is to make money for a studio that has had more than its fair share of flops this year.  The original was dead in the water, it should never have been resuscitated.