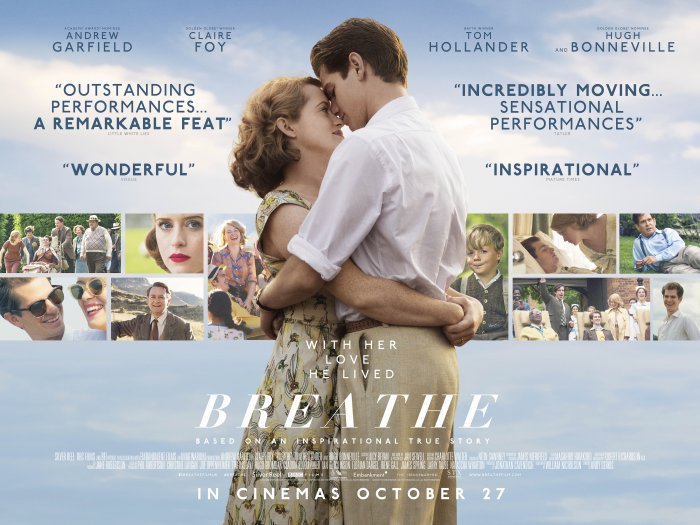 When I think of the illness of Polio, I immediately think of punk guru Ian Dury. Which is a coincident then that Andy Serkis should make his directorial debut with a film about a man struck down with the disease, considering he played the self-same legend in Sex & Drugs & Rock n Roll. However, these are two very different stories in two very different periods of time. Breathe is a tale of never giving up, of true love overcoming all obstacles and it also happens to be a joyous, life-affirming tale with two outstanding performances.

Robin Cavendish is a 27-year-old with everything to live for. A beautiful wife, Diana, a job in Africa being a tea merchant, he couldn’t be happier. Until one night he is taken ill and it turns out he has polio. Returning to his native England, Robin is bed-ridden and attached to a breathing apparatus with the knowledge that he won’t live much longer than a few months. On the verge of giving up, Robin’s wife is determined that her husband will live a full an lasting life and so against all the odds, she takes him away from the debilitating surroundings of the hospital and proves that polio victims are not just bodies languishing in hospitals to die.

Based on a true story, the film is produced by the Cavendish’s son, Jonathan, you may think that this will be a stiff-upper-lip tale in which is done very straight leading to an emotional final scene. On the contrary.  Serkis has delivered a tale of two remarkable people who changed the face of how polio victims and other disability sufferers are not only treated by the medical profession but allowing them a better life and it’s all done with wit and humour and charm. All of which makes the more poignant scenes even more powerful. It is one of those rare films where you find yourself laughing one moment and crying the next.

The lack of medical understanding about how to treat polio victims in the 1950’s, the starting point of the film, shows us a man on the verge of suicide. Robin Cavendish had such an active and extraordinary life. The first scene we see him in typical English fare, playing cricket, where he first meets his wife-to-be. We then see, briefly, his life in Africa, trading teas amidst the glorious landscapes of African plains. Like Whose Life Is It Anyway? which was the story of a sculpture whose becomes paralysed from the neck down and decides he doesn’t want treatment anymore because his life has been robbed of him, Robin falls into the same trap. Stranded in bed in a dull hospital room, attached to a breathing apparatus unable to move, it’s easy to understand how Robin could feel. However, his wife, Diana, doesn’t see this as a way out but is determined to give him a better life.

This is a tale of never giving up, or hope but most of all, of love. Diana loves Robin and doesn’t want him to die in a hospital but wants him to live and see his son grow up and to live a normal existence.  Which leads to an extraordinary change of fate for the couple, which leads to an invention of a wheelchair that has a breathing apparatus attached, which leads to much laughter and joy. A trip to Spain finds the chair broken and the family stranded on a roadside, waiting for the arrival of the engineer who made the chair to come and fix it. While the family take it in turns to use a manual breathing pump, the locals rally round to have a mini festival in Robin’s honour.

The whole film is littered with smiles and laughs and an enormous amount of hope which makes those scenes that are more shocking and poignant even more so. A trip to Germany where Robin will speak to doctors about his condition is heartbreaking, yet Serkis does a remarkable thing. He underplays it. He doesn’t highlight it with lingering shots and making the scene too long. I won’t spoil it but to say it is devastating and incredibly powerful.

What really makes this film work are the performances. There’s a nice comic turn from the always reliable Tom Hollander as twin brothers to Diana, David and Bloggs, while the rest of the cast give quietly understated performances. The two leads, however, are magnificent. Claire Foy, who plays the Queen in the Netflix show, The Crown, is terrific as Diana, a strong, determined woman who refuses to give up on the man she loves, who refuses to take no for an answer. She balances the tenderness and the toughness brilliantly. Andrew Garfield, who is more known for playing Spider-Man, gives the performance of his career so far as Robin. Limited in his movements and vocally, you never see this as a performance and you find yourself believing in everything about him. The chemistry between Foy and Garfield is electrifying.

Breathe is not a depressing film by a long shot. It is full of hope and wisdom and most of all, joy. Andy Serkis, as we know, is an amazing actor. He has now proved himself to be a promising director. On the evidence of this, I cannot wait for his next venture, his vision of The Jungle Book. Maybe somebody needs to give Serkis an honour or two?