The 1995 film Jumanji is held in high esteem in most people’s heart. A decent family adventure starring the late, great Robin Williams, about a board game that brings a jungle full of creatures to life, may look slightly dated now with its CGIs but is still loved by many. So when a sequel was announced, some people took to social media to complain, sighting that it was no sequel without the comedian. What the producers of Jumanji: Welcome To The Jungle have done is not so much a sequel but a reboot, swapping a board game with a computer game. The result is a fun is lacking adventure that relies much more on its cast to pull it through.

Four high school kids discover a role-playing computer game in a basement and decide to try it out, choosing a character each. Once they hit the play button, they are immediately transported into a jungle universe, where they have to return a powerful jewel to its rightful mountain spot. If they fail, they will never return to their own world. Taking on their alter-egos, the team must use their individual strengths to work as a team to win the game.

Using a computer game as its source plays neatly into the hands of modern youngsters who live, breathe and eat this form of entertainment and, thankfully for the producers, moves it away from the original source material of a board game, something that many cannot relate to. Yet attaching the name Jumanji is a bit of a cheat because this has more to do with Indiana Jones than the Williams favourite. 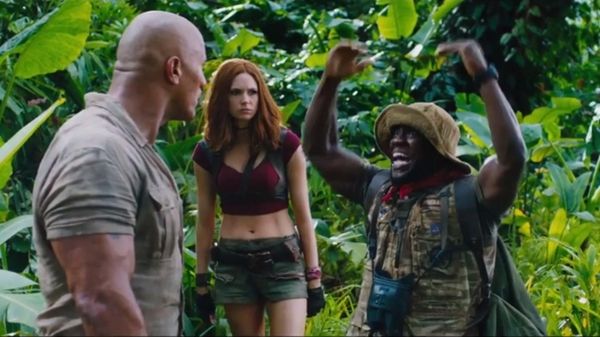 The opening explanation does outstay its welcome and the film really kicks into life once we are introduced to the kids’ new avatars: nerdy Spencer has become a muscle-bound hero who seems to have no weaknesses,; giant sportsman Fridge, is reduced in size and becomes a weapons carrier for Spencer who has a weakness when eating cake; self-doubting Martha is a Lara Croft-style walking fighting machine, while self-obsessed beauty Bethany has turned into a middle-aged male professor. Most of the film’s fun is watching these changes in character as they all come to grips with what they are.

The rest of the film is built around a succession of set pieces where each of the characters has to find ways of escaping danger and not losing one of their precious lives. Coming up deadly creatures, stampedes and a gang led by Van Pelt, the nemesis of Spencer, the group of misfits have to work as a team in order to survive and get to the end of the game. Along the way they bicker and find inner strengths they never knew they had, which, as you watch, you know exactly what the payoff will eventually be.

The film’s strong point is the cast. Dwayne Johnson, who doesn’t mind self-mockery with his own persona, is perfectly suited as Spencer, the nerd finding it hard to cope with being the hero. Kevin Hart is given some of the better smart one-liners to make this one of his better films, while Karen Gillan, dressed in an outfit that has caused much comment, has plenty of fun kicking and punching men while dancing. Jack Balck steals the film, relishing the chance of playing a female teenager trapped in his body. Jumanji: Welcome To The Jungle isn’t as bad as you would imagine, although it’s not half as good as the original. It passes the time with its quips and effects but, like a computer game lacks any real character development of emotional depth. Perfectly fine if you want your entertainment undemanding but don’t expect to remember it once you have got home.