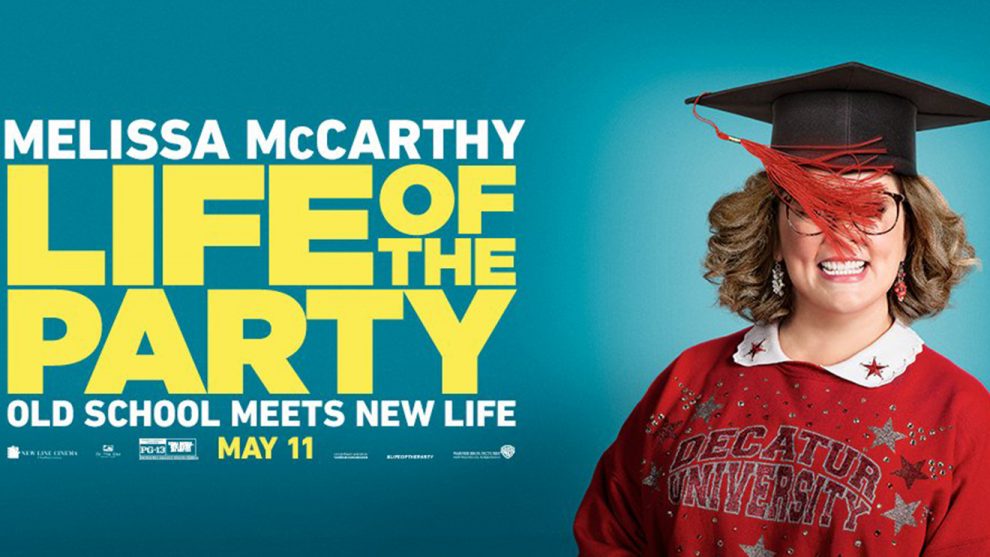 Vanity projects are a real gamble. Once in a while, they work but most fail to hit any real targets. What is a vanity project, I hear you ask? It’s when an actor, usually comedian, writes, produces, stars and, occasionally, directs a film. You can normally tell this is the case, as the star appears in every single second of the film. They normally don’t work and just shows that a comedian doesn’t necessarily know how to make a decent comedy film. This is exactly the case of Life of the Party, a very limp, predictable and annoying so-called comedy and vanity project for its lead, who is funny when working with someone else’s material.

Deanna is a middle-aged woman whose husband surprises her with a divorce. Having never graduated from college, she decides to join her daughter, Maddie, for her final year of school and get that archaeology degree she never got. Life on campus for a middle-aged woman brings its difficulties like bullies, younger men lusting after her and a complete turn around to her position as a loving wife and mother to life and soul of the campus.

We have been in this territory, ageing characters returning to school, several times before (Back to School, Billy Madison, House Bunny, Old School…shall I continue), so this had better be different than the others. Actually, no it isn’t. The predictability of the plot leads us to see this adult going from loser to star of the school. So in that case, the script needs to be razor sharp. No, it isn’t. The script lacks any real big laughs and in the screening I was in, only one scene (which would be a massive spoiler if I reveal) caused any form of reaction).

What does that leave us with? Actually, not a great deal. We watch as Deanna, with her middle-aged hair-do, clothing and motherly reaction to everything, become transformed by a daughter who is embarrassed to be in the same room as her, suddenly turn and loves her mother bringing her tiny toothpaste, into a woman who can seduce a younger man, win over bullies and become a sorority member just because she makes good cakes.

I’m pretty sure in the hands of a decent comedy director, this could be an amusing experience but in the hands of Ben Falcone, who co-wrote the script with his wife, the film’s star, Melissa McCarthy, the jokes are signposted way in advance and in their eyes, hysteria is hilarious. Actually, it’s not. McCarthy, as I have said many times before, is a very funny lady. When working with Paul Feig, he manages to bring the best out of her. The scene-stealing role in Brides Maids made her a star while Spy was one of the best comedies of the 21st century. This is the third film McCarthy has co-written and produced with her husband (Molly and The Boss being the other two). All three suffer from the same problem: Melissa McCarthy.

Here she becomes annoying after 15 minutes and we know we are in for the long haul. The other cast members spend their time reacting to every word McCarthy says and only Maya Rudolph manages to be as funny as the lead but only just considering that McCarthy isn’t funny here at all. By the time you reach the predictable sentimental ending where everything will be alright, you feel like you want to bang your head against a wall because you know that would be funnier and quite possibly more entertaining. This is a laughter-free zone and you just wish McCarthy would stop believing that she knows comedy and go back to a filmmaker who does know about comedy. Think I need to watch Spy again and see a funny Melissa McCarthy.