With America in a state where the rise of racism seems on the up, it seems wholly appropriate that Spike Lee should return to mainstream filmmaking with a story based on a true story of how a black cop managed to infiltrate the Ku Klux Klan in the 1970’s.  Spike Lee is a director known for having his say about civil rights and his anger against the system. This is is no different.

Ron Stallworth is an African-American police officer from Colorado who is having to deal with racism within the workplace and being held back from promotion. Given an opportunity to prove himself after going undercover at a rally for a former Black Panther, Stallworth discovers an advert for new members to join the Ku Klux Klan. Starting off making contact, he is invited to meet their leader but obviously, this is impossible due to his ethnic background. With the help of a fellow cop, Flip Zimmerman, the two men manage to become members of the group.

Lee’s film is a fascinating tale that is so outrageous, it could never be a piece of fiction. Facing a barrage of racist attitudes within his own department, and stereotypes making his fellow workmates question his sanity, Stallworth makes phone calls that manage to fool the head of the chapter in believing he was white but to take this journey forward, he needed a man willing to risk pretending to be him, under the suspicion of a member of the group whose actions are unpredictable. 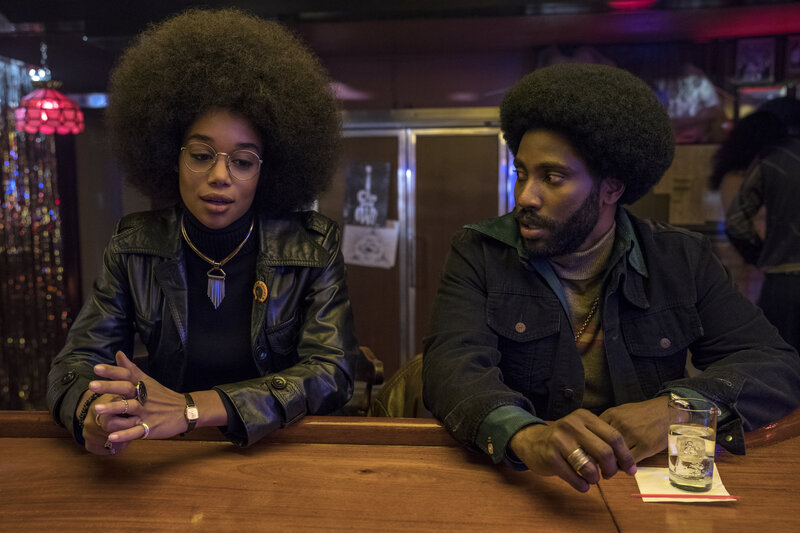 The film works on a level of a cop thriller, capturing the mood and tone of its 70’s backdrop brilliantly. Lee uses film instead of digital to give the movie that looks of a period piece, as well as the detailed production values, costumes, sets and magnificent afros. Even down to conversations about blaxploitation films of the times, as well as a soundtrack that mixes music from those years with an expansive orchestral score. The finale, a tense race against time sequence is one of the most exciting sequences in any film this year, still managing to add a hint of comedy in the process. The film’s epilogue, a series of images from the Charlotteville’s marches, impact so hard, you may find yourself in stunned silence that, even though you have been watching a story from a different time, it just feels that things haven’t moved on and in fact, we have gone backwards.

This is an important piece of filmmaking for the time, which does suffer slightly from an unbalance of tone. Instead of a dark piece, Lee injects humour that, while most of the time fits neatly into the narrative, there are moments when it becomes jarring and does lose the points it’s trying to make. It also some of the Klan members in a stereotypical manner, which does seem contradictory to what Lee is trying to say about race and the stereotypes that Stallworth is trying to play against.

Having said that, this is a minor quibble in a film with so much to offer. The performances from the two leads are terrific. John David Washington (son of Denzel) is perfect as Stallworth, oozing cool and charm with a sense of purpose. Adam Driver, in much lighter mode than we usually see in, is a perfect foil as Flip, the man willing to risk it all for the cause set up by Stallworth.

BlacKkKlansman is a return to form for a director whose career has seen peaks and troughs. From the message films like Do The Right Thing to more crowd pleasers like Inside Man, Lee is still a filmmaker who can bring out important comments on our times. This is his best film in years and a film that will leave you shaking to the core. It’s not absolutely perfect but it’s Lee at his angriest for a long time and will leave you feeling that way too.