Stuber is a real throwback to those buddy cop films that were nineteen to the dozen in the 80s. Movies like 48 Hrs, where a tough, no-nonsense cop has to work with a complete newcomer to crack an impossible case and needs his new partner. I must admit I am a bit of a sucker for these kinds of movies but sadly Stuber, which has a fine double act, doesn’t quite deliver when it comes to laughs.

Detective Vic Manning has been trying to track down drug king Oka Tedjo ever since their first meeting led to tragedy. On the day of his laser eye surgery, he discovers that Tedjo is back in town. Unable to drive due to his sight, he orders an Uber, driven by Stu, a mild-mannered guy who is desperate to get to his one true love’s home. Instead, Stu is thrown into a world of violence and death as Vic drags him around town trying to find the villain.

The title, a play on the lead character’s name, Stu with that of the cab company, may manage to raise a smile but sadly the film never delivers more than just an occasional chuckle. It’s also a film that feels somewhat off-balance as the violence is surprisingly graphic. Think Collateral with the occasional laughs. The basic premise is an interesting one. A big cop with one last chance to get his foe but is incapable of seeing, relying on the last man on earth to be a hero. A man going about his business, longing for five-star reviews from his customers, finding himself in a world he never dreamed of. The comic possibilities are endless, none more so than sharp banter from the cop and his new driver.

What we get are half-hearted quips from two leads who have previously delivered terrific comic performances. Yet the script, by Tripper Clancy, and direction from Michael Dowse, whose previous films include Goon and What If, cannot decide what to go for, an out-and-out comedy, a romance, an action film. It flits from one idea to another, and while the action scenes are well-staged if a little confusing with shaky camera work, the comedy often misses than hits. 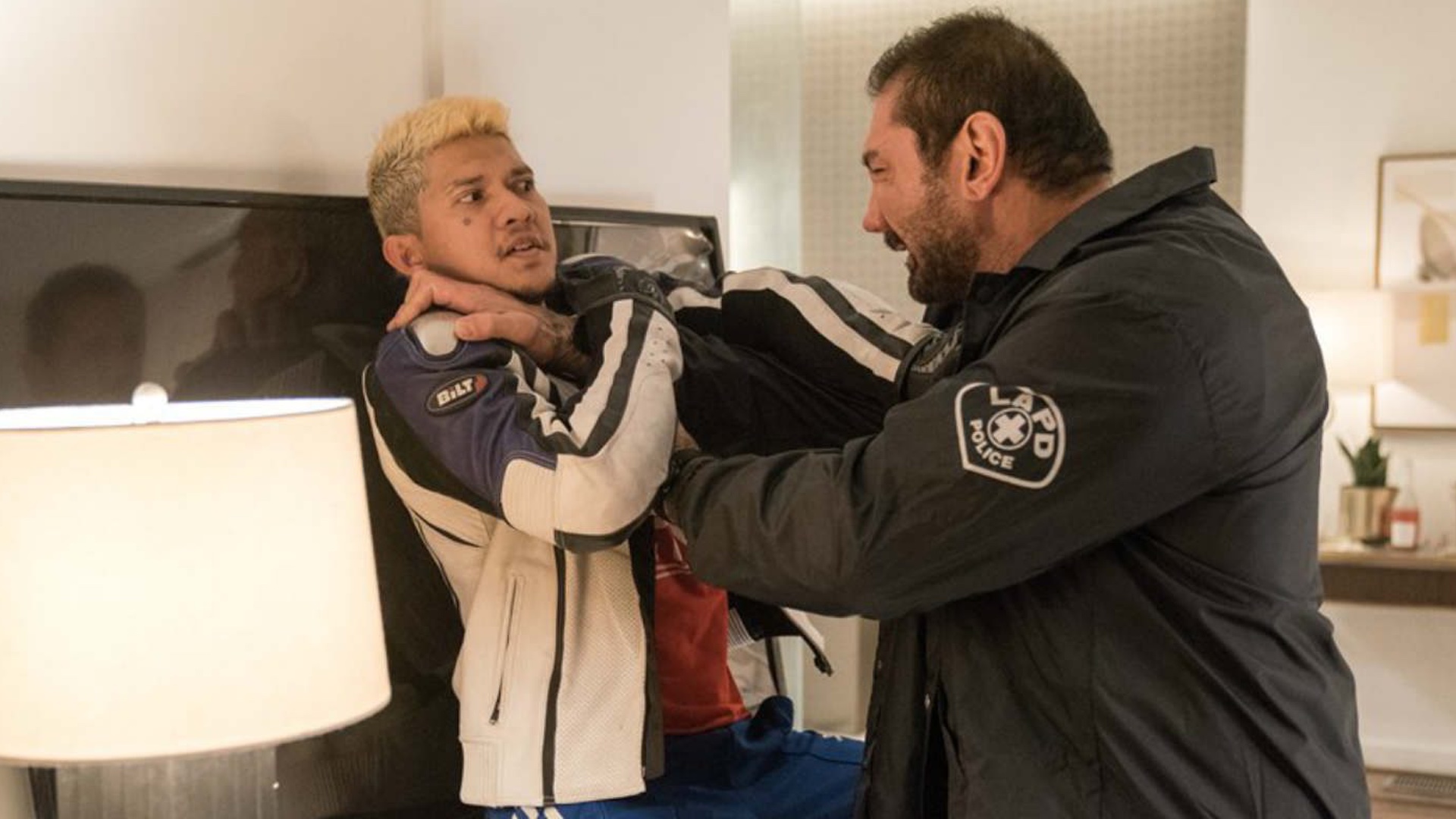 Stu is a gentle soul who is in partnership with a new business with the woman of his dreams, yet she doesn’t know his feelings. This leads to some surprisingly sweet moments, like when Stu gets relationship advice from a male stripper, yet they seem out of place when heads are exploding during the action scenes. The partnership of Vic, brutal, boorish, and brought up believing that men do cry, seems more a stereotype.

The film isn’t a total disaster, thanks to the pairing of Kumail Nanjiani and Dave Bautista. Nanjiani, who scored big in the rom-com The Big Sick, uses his off-kilt delivery to some good effect while keeping his nice-guy persona intact, even when losing his cool. Bautista, who has shown his comic muscle in Guardians of the Galaxy, also does some good work as the cop. Sadly, the script isn’t strong enough to keep the laughs coming thick and fast, which is really needed to. Nice to see Mira Sorvino back on the screen as Vic’s boss, although she has little to do.

Stuber is a film full of possibilities but fails to live up to them. If the script was tighter and the story not as haphazard, it would have been fine. Not terrible but particular memorable either and will probably be forgotten about in a few months.