The second of the Snow White movies this year is a far different creature than the misfire that was Mirror Mirror. This is a tougher, darker and a far more violent version of the classic fairy tale that tries its best to reinvent the story but there’s something that doesn’t quite fit.

A King, grieving for the death of his wife, saves a beautiful woman from dark knights and falls in love with her. Quickly they marry but as soon as they are wed, then the woman, Ravenna, kills him and immediately takes over the kingdom, imprisoning the King’s daughter, Snow White, in a tower where she stays for years. Using beautiful young girls to drain their youthfulness out of them, Ravenna wants to live forever and never lose her looks but needs Snow White’s heart to complete the circle. Calling for her, Snow manages to escape the kingdom and is desperate to get as far away from the evil Queen. Heading to the dark forest, Ravenna calls upon a Huntsman to find her but he soon changes alliance when he discovers just who Snow really is.

I can just see the meeting: We take the story of Snow White and make it into a Lord of the Rings-lite, Ridley Scott epic. Sounds appealing and for the most part it is. The thing that bothered me while watching this was, who is this film aimed at?

The set pieces are well executed with some very visual battle scenes and well handled fight sequences. The special effects are fine, even if we have seen them all before, and the general production values are good. Director Rupert Sanders does well with these parts of the film, although the scenes in-between the action drag badly.

The performances, on the whole, are fine too. Charlize Theron, an actress who doesn’t mind looking the worse for wear (see Monster for example), relishes the chance to play bad, mixing the quietly menacing with the shouting and general anger that you get from playing bad Queen. Balancing just this side of pantomime, she does a better job than Julia Roberts did. Flavour of the month, Chris Hemsworth, looks the part as the Huntsman, big, strong and slightly grubby but vocally it sounds like he’s auditioning for the voice over for Guinness! 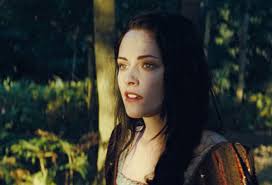 The dwarves are here too, all eight of them? Clever casting here by taking established British actors (Ray Winstone, Bob Hoskins, Ian McShane, Nick Frost and Toby Young) and making them the infamous fellows that Snow relies on to help make for an element of fun, and they get the better of the lines (While in a sewer, Winstone’s dwarf points out “That’s one of mine!” Need I say more!)

The surprise of them all is Kristen Stewart as Snow. With a decent English accent, she holds the film together well and while maybe not stunningly beautiful, she makes her character believable with an element of toughness to boot. Although all the characters suffer from being badly underwritten, she impressed me more and maybe now she will be taken more seriously as an actress (she was equally impressive as Joan Jett in The Runaways).

So what seems to be the problem? The problem is with a story like Snow White it already comes with a reputation. Most will know the tale from the classic Disney animation, or maybe the countless pantomime versions. Even having Mirror, Mirror out before this could cause problems. This, however, is nothing like those. Firstly it is incredibly violent. The fight scenes consist of stabbings and slicings and don’t leave too much to the imagination. There are also some very scary effects that young children are not going to be handled, so that demographic is out the window. The fans of fantasy films like LOTR and the likes, are hardly going to want to see a film called Snow White! Even the Twilight fans, who will flock to see Stewart may find the whole thing a disappointment. No romance, no ludicrous camping scenes and definitely no vampires or werewolves!

So while not a terrible film, it’s problem is identity and once you get into difficulty there, you may find the audience won’t be able to go along for the ride, either!