It’s been in the works for years. The anticipation and build-up with viral videos and mouth-watering trailers over the past year has made it THE movie to see this summer. Yes, Ridley Scott’s prequel to his 1979 sci-fi horror masterpiece is finally here and is it worth the wait? Well, kind of.

The distant future and two scientists, Elizabeth Shaw and Charlie Holloway, have made it their life-long ambition to discover the truth behind the wall drawings and images they have collected that show a superbeing pointing to circles in the sky. These dots are a galaxy far away and so an expedition is formed to go to the one planet that has sustainable life. Once there, the scientists and the crews of the ship find a pyramid like structure and they go to investigate, finding that inside something is not right at all and the meaning of life maybe more about death.

It’s really hard to write this review on the grounds that I am completely torn by the movie itself. Let’s start of with a definite positive. It looks incredible. Cinematographer Dariusz Wolski and Scott have done an amazing job. I don’t think you will find a more beautifully crafted film than this. Every frame is crisp and pleasing on the eye. The effects are also right up there with the best (even though as a prequel to Alien, the technology is better, an argument that was also used in the Star Wars prequels). And there are moments of truly shocking horror. If you thought John Hurt’s gut-busting scene was horrific, you ain’t seen nothing yet!

So you are wondering, what is wrong? The problem is the script. Now many reviewers have already mentioned that the script isn’t great and they are absolutely right. The dialogue isn’t terrible but the plotting and structure is. It really doesn’t know what it wants to be. It starts like a deep philosophical examination of the meaning of life, that could be closer to the thoughts of Scientology then the bible. That’s perfectly fine and you are settling back for an intellectual piece of science-fiction. Then it drops the whole debate, as if it wasn’t even spoken about and we are in stock horror territory, where one by one the crew of the ship are bumped off.

This is where problem number two lies. Where Alien worked brilliantly was using a crew of seven, that we all knew who they were, what they did, what their function on the Nostromo was and, in a sense, we got to emote with them, understand them and when they died, you felt something for them. Even James Cameron’s sequel, Aliens, he managed to gather a larger group and we still understood each of them. Here we have a crew of about 17 and yet we really only know about five of them, so the rest become almost like the Ensigns in Star Trek, there only to be disposed of. For the horror to really strike a cord, we have to feel something for them.

Problem number three is that the plot seems to have moments missing from them. You are watching one superb set-piece then it jumps to something else and you start questioning what just happened, as if a whole scene has suddenly been cut (maybe it has and will be released on DVD in the director’s cut). And if this is a prequel, then the ending really doesn’t make sense for the original film to continue, unless Scott is planning to make a second sequel (I really don’t want to say what happens, only that what does happen, shouldn’t happen where it does…)

So that leads us to the performances. Noomi Rapace, who you might know as the original Lizbeth Sandler in the Millennium trilogy, is given her first lead role in an English speaking film and she takes on the part of Shaw with aplomb. She is tough, spunky and determined even in times of complete trauma. Charlize Theron (in her second film of the week re: Snow White) gets to play bad (kind of) as the matriarchal Vickers, the woman paying the money for the mission and thus, wanting it her way and most of the time, getting it. She has an air of authority that not only makes her appealing to watch but even more sexy than she already is. (Tough women! Can’t beat them!) 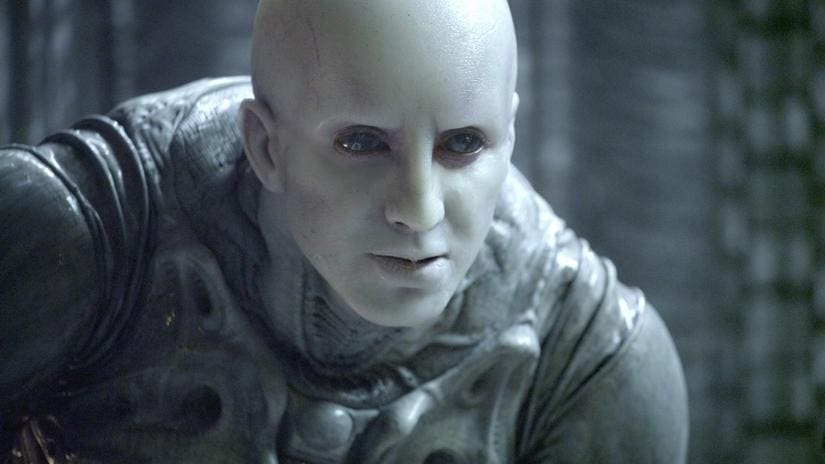 The real star of the film is the brilliantly cold performance from Michael Fassbender as David, an android with a passion for Lawrence of Arabia. His is a scene-stealing performance that manages to outdo both Ian Holm and Lance Henriksen. His presence lifts the film and even if the characters are so badly underwritten, he manages to make David an utterly believably creepy and sinister creation.

I really wanted to love this film. I admire Ridley Scott greatly. I think he is an amazing film maker and his eye for the visual never lets him down and thankfully it is here to see. Although making this 3D once again doesn’t work at all and I would have preferred a 2D version, only they are very few and far between. If truth be known I was disappointed and I only came away liking it. Yes, it’s a thrill ride. Yes the horror is effective and memorable but as a complete package, it fails and I, for one, am saddened by that.