Adam Sandler. A man who, once upon a time, starred in a film called Punch Drunk Love. It wasn’t a massive success and some regarded it as just odd but it proved one thing: Adam Sandler could act and star in films that pushed the boundaries. Ever since then, Adam Sandler has become one of the laziest film stars in the world and it is a surprise that he still has his name as top credit because with films like Grown Ups, Grown Ups 2, Jack and Jill and Just Go With It, his films are infantile, badly conceived and poorly directed with little or no comic redemption. So now we have Blended, which sees him re-team with Drew Barrymore. Maybe it should have been re-titled, Blanded! 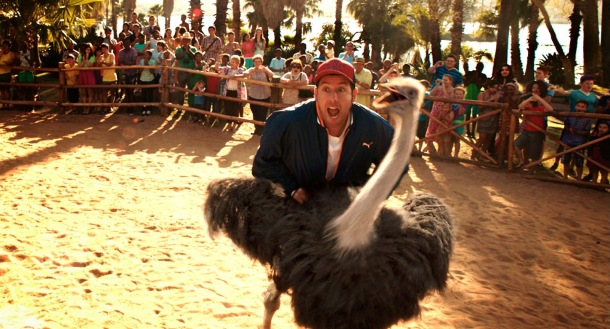 Jim is a widower with three girls who he brings up as tomboys. Lauren has two boys and an ex-husband who is more interested in himself than his kids. The pair have a disastrous blind date and decide that they are not right for each other. Thanks to a chance cancellation, Jim and Lauren get to take their children on a holiday to South Africa but they have to live in the same hotel room and spend their time together. As the days move on, they find connections with each other siblings and with themselves.

Everything about this film is routine, from the laughter-free script that plays out like a reject from The Brady Bunch, to the massively over sentimentality in which people who buy tickets are instantly given a free bucket to throw up in, to a film that you think will end after 90 mins but carries on for another torturous 30 minutes.

Director Frank Coraci, who helmed one of the better Sandler comedies, The Wedding Singer, also starring Drew Barrymore, does know how to direct comedy, as proven with the aforementioned 90’s comedy smash but here he just points his camera and lets the cast read their lines, so the timing is way off and jokes that could be genuinely funny, fall flat on their face.

Michael Caine famously admits that the second he saw the words “the Bahamas” in the script for Jaws: The Revenge, he instantly signed up. The same must be said about this because why else would you want to make a film as bad as this apart from spending time in a luxury hotel in South Africa?

Of course, we are constantly reminded that they are in South Africa by the amount of random shots of wild animals, just to pad out the already too long nonsense and how they get there is possibly the worse plot devices ever seen. Once there, we get the usual collection of body function gags, slapstick and just childish humour mixed with cute kids crying over lost mothers or unsupported fathers.

Sandler and Barrymore have proved they are an appealing couple in The Wedding Singer and, to an extent, 50 First Dates but here they seem to have lost all that chemistry and are going through the motion. It also doesn’t help that the second they “hate” each other at that first date in Hooters, you know by the end they will fall in love (and that’s not a spoiler alert, it just blatantly obvious that if you don’t realise it, this is the perfect film for you).

No one else stands out, although the closest to raise a smile is Terry Crews as an annoying singer with a bad choice of vulgar suits who would have been hilarious if we could actually hear what he was singing. Oh and to show how unoriginal this film is, one of the characters, a blonde girl who has fallen for an older man, has been ripped off from Anna Faris’s character the superior The House Bunny.

If we are going to be positive, this is far better than the Grown Up films or the really awful Jack and Jill but then that’s not saying much. All I can say is that if you want to watch the most predictable yet lacklustre comedy of the year, then look no further.