Going into Ryan Gosling’s feature debut, Lost River, is like looking through a large treasure chest. Somewhere inside is some very rich pickings but because it’s all mixed up, you have to search through the rough stuff before hitting the good.

Gosling has obviously got a keen eye for the visuals, which is a bonus for the film. It does look strange and weird and sometimes magical, even if the surroundings are depressive and dilapidated. What Gosling also has is a fondness for the works of David Lynch, Terrence Malick and the director he’s worked with on the superb Drive and the odd Only God Knows, Nicholas Winding Refn.

In fact, you can look at this bizarre adult fairy tale and if you didn’t know the director, you’d have probably thought it was Refn. It has his style and sense of macabre stamped all over it. Perfectly acceptable from the director but when it looks like a carbon copy, it feels like you are getting a poor second option.

The story is all over the place, as we follow Billie and Bones’s journey, trying to find ways of surviving and keeping together. yet their tales are disjointed and uneven. Billie’s exploration of the darker side of the human condition, by joining a nightclub that exclusively deals with blood and violence, while excitable males cheer and shout at the graphic detailing of dismemberment, is never fully explained, yet there are moments when Gosling’s cinematic eye captures some beautiful if shocking moments.

Bones’s story is more fleshed out, with the young man avoiding the thug, Bully while forming a relationship with Rat, a young girl who lives with her grandmother, a silent woman who sits watching television images of her past. There’s a sense of creepiness about this situation, yet when Bones starts to discover the watery town, it too is never fully realised.

The performances are fine from the strong cast, which Gosling does have to be commended upon. Christina Henricks does a good job as Billie, a woman on the edge. Iain De Caestecker, best known for his role in the TV series Marvel’s Agents Of S.H.I.E.L.D is a solid lead as Bones. Nice to see 60’s and 70’s exploitation horror queen, Barbara Steele back on the big screen, even if she doesn’t say anything as Rat’s grandmother, while Matt Smith moves as far away from his former character, Doctor Who, to play the brutal thug, Bully.Only Eva Mendes, as the queen of the club, seems to be having any real fun with her character. 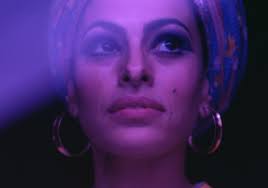 The trouble is while there are good actors in the roles, the characters aren’t completely realised and so we never get to emote with them, feel their pains or passions. With Gosling’s script, it fails to develop them. For someone who is such a good actor himself, he seems a shame that the one thing you’d thought he’d understand most about is character.

Lost River is a film that does have some terrific moments but they are few and far between, hidden among the rambling messy bits and the nods to Lynch’s weird film making style or Refn’s explosions of violence. This doesn’t come across as a Ryan Gosling film, more a collection of other directors he would love to be like. Not the total disaster we were all led to believe and certainly didn’t deserve the booing it received at last year’s Cannes but not a masterpiece either.