Written by: David Nicholls and (based on the novel) Thomas Hardy

When you are dealing with a novel like Thomas Hardy’s classic, Far From The Madding Crowd, you are never going to capture the whole story in such a short amount of time, which is why television adaptations seem to work better. There’s no time restraints. So having a story to two hours is always going to be an uphill struggle. Kudos then goes to David Nicholls, who, while choosing the greatest hits of the book, has managed to add a new dimension to the tale.

Bathsheba Everdene is an independent woman who has inherited a farm. Determined not to stand aside and watch the place being run for her, she gets stuck in. While coping with a woman in a man’s world, she attracts three very different men. Gabriel Oak, a quietly spoken shepherd; William Boldwood, a serious businessman who owns the farm next door, and Frank Troy, a soldier riddled by grief with a dark side. Can Bathsheba make the farm work and choose the right man?

Using the glorious Dorset countryside as its background, Danish director Thomas Vinterberg tries to capture the romance and the beauty held within Hardy’s novel, with some quite breath-taking cinematography from Charlotte Bruus Christensen. Unlike his previous film, the haunting and tough, The Hunt, Vinterberg has given us a straight forward, no-nonsense approach to this new version. In fact, you could say, that it is very old-fashioned in its depiction and yet strangely modern too. 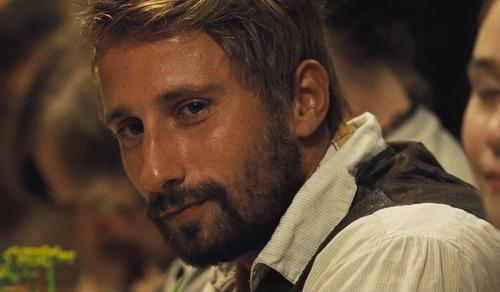 What Vinterberg and Nicholls have done is made Bathsheba a more independent, almost liberated woman. She doesn’t need the husband in her life to support herself. She doesn’t need to be just the lady of the land, instead, as she says to her hard-working farm-hands, she want to astonish them all. She certainly does that by upsetting the rich business men when selling her corn and by her unflappable attitude to any danger or uprising.

Making her such an incredibly strong-willed woman means that the men have to equal her in character and this is where the film slightly falters. Oak, the quietly spoken more credible husband material, often is so quiet he almost fades into the background, while Troy is so pouting and almost psychotic in looks, you wonder how on earth Bathsheba could have fallen for his, lack of, charm. In fact, the legendary sword scene that was made so memorable in John Schlesinger’s 1967 version, when Terence Stamp’s Troy impresses Julie Christie’s Bathsheba, was somewhat erotic in its nature. Here it’s as if the man wants her head cut off.

Yet all the while, you find yourself distancing yourself from the characters and the events, mainly because of the patchwork nature of the storytelling. It’s hard to connect emotionally to people when the scenes seem somewhat disjointed and only are there to give us the outline of the book.

The performances range from fine to impeccable. Matthias Schoenaerts does a decent job as Oak, yet compared to the others in the film, his underplaying does tend to lose him a little among the haystacks. Tom Sturridge is suitable strange as Troy, although his tantrums do come across like a baby throwing his toys out the pram.

Whereas the reliable Michael Sheen does a tremendous job as the uncertain William Boldwood, a man desperately in love with Bathsheba and yet is so understanding of her plight. The scene in which he confesses his heartache for her is unbelievably moving and worth seeing the film just for that masterclass in emotional acting.

Finally there’s Carey Mulligan, who is slowly becoming the champion for all strong women’s characters (her next project is Suffragette). Here she sparkles and shines so brightly, a beautifully controlled performance of a woman torn by the men around her, yet so head-strong that she’s willing to risk her life for her farm. It is a terrific turn by the actress, proving once again that she is at the top of her game.

Far From The Madding Crowd is a mixed bag. Beautiful to look at, with two outstanding performances and yet it also is lacking in the richness of Hardy’s prose. I would have rather seen a fuller, longer film instead of one that leaves you longing for more.