Pixels is a high-concept blockbuster that has one thing stopping it from becoming a firm Summer favourite: Adam Sandler. I went in hoping things would be better. The idea sounded curious and, from the trailers, the effects looked fun. Yet whoever had this idea needed to go back and try to renegotiate because Sandler, like everything he has touched after Punch Drunk Love (his best film ever) has turned it into this summer’s biggest turkey.

In the 80’s, a time capsule was sent into space with clips of a world championship video game competition. Years later and the Earth is under attack from aliens who have sent down giant versions of those same computer games. The President has only one option: to turn to those players from the tournament to take on the attackers.

The idea isn’t terrible. Using familiar computer game characters like Pac-Man and Centipede to attack the earth has plenty of opportunity for solid special effects and potential for some big laughs. For fans of the old Atari games, this is like visiting an old friend…who has really let themselves go. In the hands of director Chris Columbus and Mr Sandler, this just comes across like a Ghostbusters wannabe without the warmth, humour or excitement.

They try their best to evoke the memory of the 1984 classic, in almost every way. The characters wear boiler suits, the cars have all kinds of electronics attached, they have replaced proton packs with light guns. There’s even a completely pointless Dan Akyroyd cameo. The trouble is, Adam Sandler is no Bill Murray and should never even attempt to be like him.

So he goes into his smart-alec, one-liners that are delivered like he’s reading the phone book. In fact, he sleepwalks his way through it. The whole production just feels lazy, as if no one can really be bothered. Once again, Sandler has his buddy, Kevin James, on board in a role that is even more unbelievable than aliens attacking the planet. Yes, James is The President! The world’s unfunniest man, who really has one-act and that is, he’s large and he can do funny dances (yes, he does one in this) is given the role of the leader of the free world. Fear for us all! 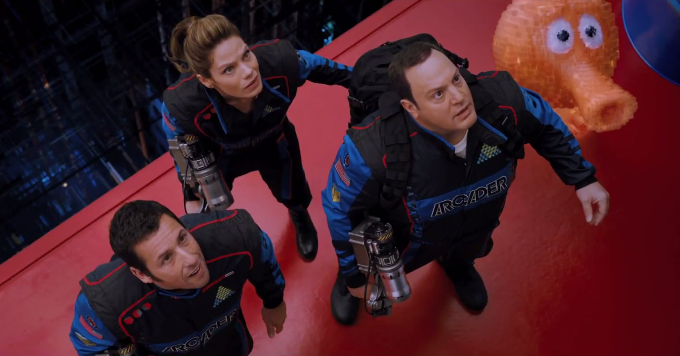 Michelle Monaghan provides the eye candy and at least tries to make something out of her role as an army scientist, yet it’s nothing more than an opportunity for Sandler to ogle her. The usually reliable Peter Dinklage, as an arrogant games champ, dons a terrible mullet wig (oh the hilarity!) and has a strange desire to spend an evening with Serena Williams and Martha Stewart (and who said comedy was dead?)

Only Josh Gad, he of the voice of Olaf from Frozen, tries to inject some life into the proceedings and has the funniest moment in the film as he faces off with a bunch of marines. Brian Cox, as a disgruntled general, looks like he’s being punished and has to do films like this to make ends meet, while Sean Bean, as a SAS officer, gives more life to the o2 adverts than here.

This is a crassly unfunny, boring excuse of a blockbusters that flopped at the American box office and I just hope and pray will do the same here in the UK. When you compare it to the likes of Mission: Impossible, Ant-Man and Inside Out, this looks like someone has given millions of dollars to a bunch of wannabe comics who don’t really want it in the first place. Pixels is Sandler’s fifth comedy flop in a row (after Jack and Jill, That’s My Boy, Blended and The Cobbler). Isn’t it time that someone told him to stop making movies?