Films don’t necessarily need million dollar budgets to produce something gripping and unsettling. Take The Survivalist, a post-apocalyptic drama filmed in Northern Ireland that has a cast made up of three people and is set in fields and a shed. Yet it one of the most atmospheric thrillers I have seen in quite some time.

A man. living alone in a shed with his own personal crop, is constantly on the lookout for those who want to take it from him. With very little food and just his small plot of land, he sets traps up to give him advance a warning from those who come near. One day, two women arrive, seeking food and shelter. Reluctantly, he allows them into his world, not knowing if these two strangers are in genuine need of help, or if they have other ideas.

Writer and director Stephen Finkleman, making his feature debut, takes a well-worn idea, a loner in desperate times, and gives it an interesting spin. Firstly, this is not a vast desert of sand dunes or crumbling decay. It is a land full of life: trees and grassland flourish, mushrooms grow, even the sky doesn’t have that familiar nuclear glow that is shown in so many post-apocalyptic movies. 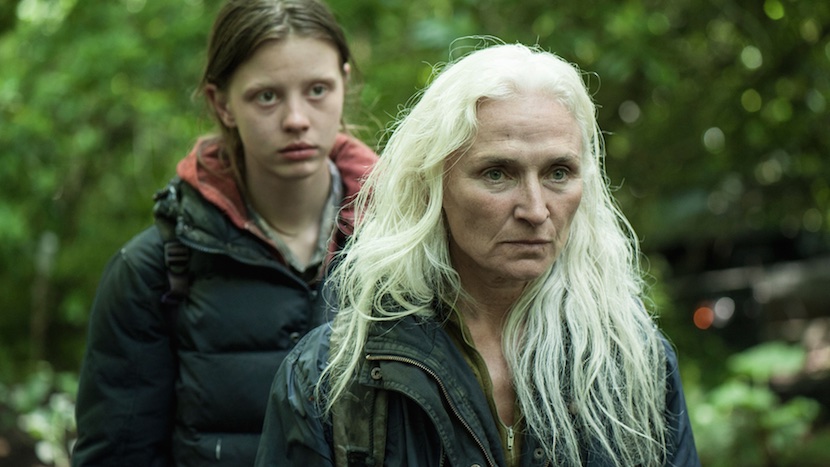 He then uses silences to build on the tension. No over-used orchestration to register emotion or action changes. In fact, the lack of music makes the film even more unnerving. He also doesn’t allow dialogue to interfere with the overall paranoia of the Survivalist. A scene in which the younger of the women, Milja, offers herself to him, is done without an utterance of a word. It is a film that relies on looks. It relies on second guessing the characters thoughts, as they are never fully expressed.

We only have small clues as to why Milja and Kathryn, a grey-haired older lady, are doing there and what they really want. As the film goes along, you know that Kathryn wants the Survivalist out of the picture so they can live in the homestead, yet you are never sure if Milja feels the same. Without any back story or information on the characters, even The Survivalist himself we know very little about, except his fear of being attacked, it makes us question even more about the characters and their overall motivation.

While the performances from the three central characters are good, this is a film that belongs to the talented writer/director. He has crafted a film that has, in some areas, been called Mad Max for the art house fan. Yes, it’s minimalistic approach might not be for everyone’s liking and there are moments when nothing much really happens at all. Yet it is these times when the tension builds so that when something does happen, usually quite unexpectedly, it jolts you.

The Survivalist is a strong debut from a talented new face. It may not get the attention from a large audience, which it truly deserves, although the film was nominated for a BAFTA but I want you to remember the name Stephen Finkleton because I get the feeling he will be a big player in the film world in years to come. A striking debut.