There is something evil afoot within Alvin and the Chipmunk 4 (or subtitled The Road Chip). It’s not the fairly innocuous plot or the predictable slapstick set pieces or the annoying musical numbers or even, for that matter, the overly sentimental finale. None of these, in fact. what shocked and surprised me is that Alvin, the squeaky-voiced chipmunk, is a fan of shock value trash movies of the 70s. If the youngsters who have dragged their parents to see this only knew!

Alvin, Simon and Theodore believe that Dave, their carer and manager, is going to propose to Samantha, Dave’s new girlfriend. This has to be stopped, mainly because it would mean that Samantha’s bullying son, Miles, would become family. So heading off to Miami to stop the proposal, Alvin and the guys get into a heap of trouble with an Air Marshall while trying to travel across the country.

Watching this fourth outing of the popular CGI animated/live-action family film, is a little like joining the dots in a dot-to-dot book: you know that as 2 follows 1, you know exactly what to expect here. There are no surprises. The slapstick is lame and laboured, the jokes somewhat childish, while we are inflicted with high-pitched versions of pop songs (Mark Ronson’s Uptown Funk being the biggest number in the film). We follow Alvin and the gang as they go on a bizarre Planes, Trains and Automobile type journey to Florida, in order to stop their friend and confidant, Dave, from marriage. 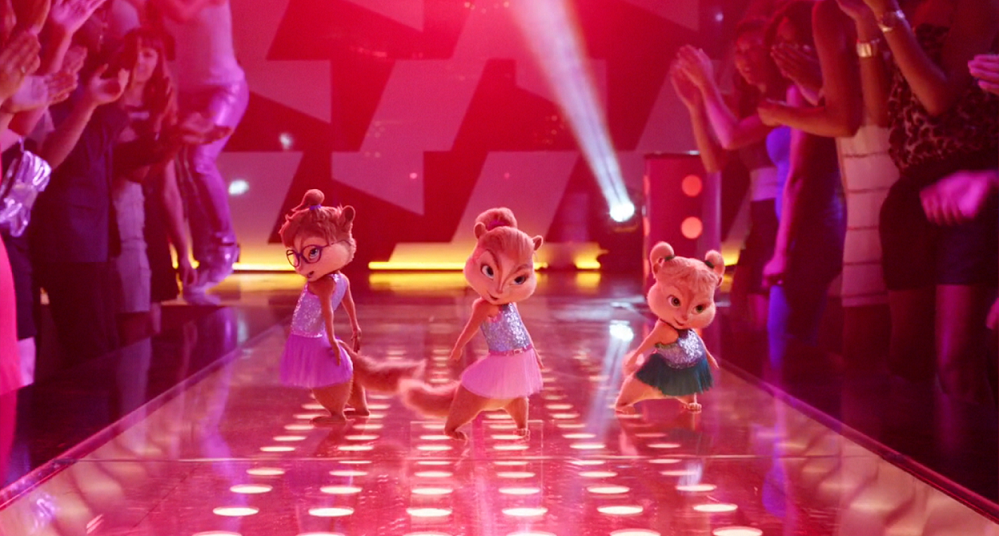 Yet while we cringe at the puns and well-telegraphed gags, there is something hidden inside the inane comedy that seems misplaced. These are the most adult jokes. I say “adult” loosely because these are more specialised. All family films now seem to cater for the poor parent who has to accompany the sprogs to see these type of intelligent-sucking movies, by subtlely adding a few more “mature” gags that will go over the kids heads while the older viewer can smile without having to explain what they have found amusing.

However, this time, the jokes for the older members of the audience have a distinctive movie-related theme. There are musical references to Psycho and The Good, The Bad and The Ugly, while The Exorcist gets it’s own visual gaga when Miles, Samantha’s son, while trying to persuade airport security that Alvin is, in fact, a toy, twists his head with the exclamation: “It even goes all Linda Blair!”

The real shock is in a scene when Alvin is sitting next to director John Waters on a plane. Waters, for those who don’t know, is responsible for a series of trashy low budget comedies in the 70s, notorious for their bad taste humour and, in particular, a scene in Pink Flamingos where star Divine eats fresh dog poo. Which is where the joke comes in. Alvin turns to Waters and says “Don’t judge me, I’ve seen Pink Flamingos!” Joke of the year! Suddenly a predictable, limp family comedy becomes the shocker of the year. Who would have thought it!

Apart from that, it’s business as usual and when the endless squeaking and sentimentality about family and belonging is dealt with, this is just another Chipmunk movie. Yet for those brief few moments, it became the best comedy of the year. Actually, more laughs than Dirty Grandpa AND Grimsby put together!