Written by: Duncan Jones and  Charles Leavitt (based on the Blizzard computer games, Warcraft)

Fantasy films and stories are something I find very hard to relate to. The made-up names of characters and worlds just confuse me, while spending time with these creations, usually involved in some form of war, leaves me cold. I admit right here, right now, The Lord of the Rings somewhat bores me, So I was hoping that Duncan Jones’s film adaptation of the popular computer game would turn my destain for sword and sorcery around. Sadly, it didn’t and it may have even made it worse.

The human land of Azeroth is invaded by orc warriors, desperate to find a new realm to rule over after theirs has been destroyed. Using a portal conjured up by an orc wizard, the cracks between orc tribes begin to show when one disagrees with this forceful attack on a peaceful land.

As you can gather from the very short description of the film, I was utterly lost by what was going on, which is always going to be problematic when trying to review a film. The first rule is a basic understanding of the plot. For me, not a  clue. The second rule, if the plot is confusing, a basic understanding of the characters. Again I’m at a loss. So for two hours I sat looking at these flashing images where monsters fought men, men fought monsters and monsters fought monsters wondering if I was ever going to get any of this.

Actually, I did pick up a few bits and pieces for it wasn’t a complete waste but the thing with this movie seems that if you are a fan of the game and you enjoy the whole RPG world, then you are going to love every moment of this. If you go to the cinema looking for character development, a sense of emotional value or the slimmest chance of a coherent plot, then stay well away.

There are a few plus (this isn’t as terrible as all that). It certainly looks spectacular and the creations by the CGI department are impressive, whether it be the towering castles and landscapes or the orcs themselves. 20 months spent on the effects alone have not been pointless. Even the overlong battle scenes which pop up frequently throughout are well staged and well executed. Yet the film is brimming with ridiculous dialogue and incredibly hammy acting, where if you are trying to be sincere, you have to speak in a whisper, and when you are being heroic, you have to shout as loud as you can, to be heard over the overbearing soundtrack and crashing of swords.

I like Duncan Jones as a director. His two previous films, Moon and Source Code, are among my favourites for this century. He is a director of great imagination and a solid storyteller. Yet here he seems to be held down by a corporation, by fans of the game and by his own love of the source material. There are flashes of Jones’s personal touches, where either humour slips in or even a slim moment of emotion but these are few and far between and so we ned up with, well, a two-hour computer game. 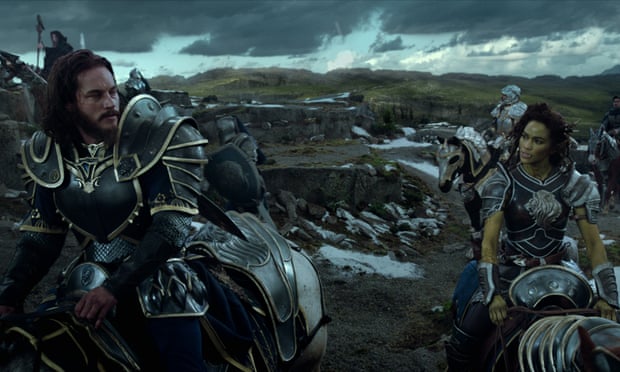 Warcraft: The Beginning isn’t awful. I’m sure there is an audience out there who will love it. There is also an audience who will find it a bore. Find it contrived and dull. Find it just a waste of talent. Sadly I am in that group who wanted Duncan Jones to change my feelings towards fantasy. This didn’t do it.