Can it seriously be twenty years since we sat in amazement and watched the White House explode from an alien attack? The biggest film of 1996, which, like or loathe, was a massive game-changer in the world of blockbusters, was almost guaranteed a sequel. However, we didn’t think we would have to wait quite so long. Was it worth the wait? Is this a bigger, more impressive spectacular? Not really.

Earth’s defenses, after the attack from alien 20 years before, have grown. Taking the technology from the invaders, we are ready for another visit. What the Earth isn’t ready for is a giant mothership that almost engulfs the planet, coming to remove the Earth’s core. With a new generation of pilots relying on those who fought and survived the last time, they have to take on a threat that is after a mysterious orb that is in the possession of the army and scientists.

Let’s get on thing straight here: I was not a lover of Independence Day. The effects were impressive but it was basically a B-movie with more money thrown at it. Returning director Roland Emmerich has become an expert in destroying the planet (see Godzilla, The Day After Tomorrow and 2012), so we expect major landmarks being blown to smithereens (this time, London is the target, even if the geography is slightly out. How close is the London Eye to Tower Bridge?) Even one of the characters, as the historical bridge is crushed by falling debris retorts: “They like to get the landmarks.”

Yet it does take some time for the glorified fireworks to come. We get introductions to new characters as well as less of an introduction to the returns (less Will Smith’s Captain Steven Hiller, who reported wanted $50 million dollars for appearing in two sequels. Emmerich immediately killed off his character). Instead, we have Hiller’s son, also a fight pilot, who has a beef with maverick pilot, Jake Morrison, who is dating Patricia Whitmore, the daughter of former President Thomas Whitmore, who is losing his mind after the events of 1996, while former saviour of the planet, David Levinson is back looking just as concerned.

So once the subplots and strands relating to each of the characters are played out, it’s business as usual, as the planet’s defenses, made up mainly of Americans, take on an enormous mother of an alien and her huge ship. Yes, everything in this film is bigger. Bigger effects. Bigger explosions, Bigger fights. Bigger all-round crud! 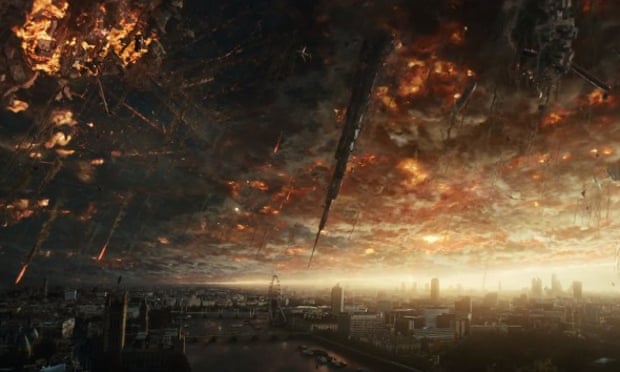 The whole thing is a mess, made up of borrowed parts from other, more superior movies. You get a touch of Close Encounters, with a pinch of Star Wars, a slice of Alien and even a teaspoon of Fight Of The Navigator! The plot doesn’t make any sense whatsoever and even if you can follow the various subplots, it jumps and cuts from one unexplained event to another so often, you basically give up on working out what is going on. The script is brimming with unintentionally funny lines and moments of pure cheese. Yes, we get the whooping crowds and plenty of high-fiving, as the jingoism reaches fever pitch.

The performances are your usual affair of wooden to mildly interesting. Liam Hemsworth and Jessie T. Usher are hardly replacement for Will Smith and Harry Connick Jr, while Bill Pullman returns to go all out bonkers as Thomas Whitmore. Thankfully Jeff Goldblum is back as Levinson, with his quirky delivery and slow-motion hand gestures that we have all come to know and love about the Goldblum. It’s a pity he isn’t in the film more often as he lights up the screen with his very presence.

This does exactly what you’d expect from a sequel to a big dumb sci-fi film. Bigger and dumber. It’s not as painful as the first film but then it’s no masterpiece either. It’s just your average popcorn fodder that you’ll probably forget by next week as another summer blockbuster comes along to steal its crown. Not utterly awful but not great either.