There are some films that you can place neatly into a category. There are some that cross the borders between various genres. Then there are those that you can’t quite pigeon-hole. Swiss Army Man is one such film. What you can say is that it is an original, funny, touching , infuriating piece of cinema with two terrific central performances and a soundtrack that is both weird and wonderful. In other words, this is a very odd film indeed.

Hank, alone on an island, is about to hang himself. He then notices a dead body washed up on the shore. A body that is full of wind. Using the body as a jet ski, Hank manages to escape the island and ends up somewhere different, where he has to head into the wooded area in hope to find civilisation. The body he has found he takes along and it soon becomes apparent that this body, called Manny, could become useful in many ways, as well as being a companion for Hank on his long journey to get home and to the woman he loves.

If you are not a fan of jokes about farting, this might not be the film for you because it is full of wind. Noisy, loud, long flatulence. In fact, it even becomes part of a long conversation between Hank and Manny. Hang on, I hear you cry. Haven’t I just said that Manny was a dead body? Yes, he is but this is one of the oddities about this film. It doesn’t stop Hank help Manny understand the world as he has lost his memory. He is dead, after all.

The film is a strange mix of metaphysics and slapstick, moving from the lowest forms of humour to some quite deep philosophical conversations about the world we live in. We follow the hapless two as they come across bears, rivers and deep caverns, in which Manny becomes even more useful, as Hank uses the body to chop wood, light campfires and propel objects using his mouth and the wind inside. He even makes for a handy water bottle.

I did warn you that this film is weird. Yet as odd as it gets, there is a side to it that is surprisingly touching and manages to speak volumes about friendship. There is also a woman at the heart of the story. A picture on a mobile phone which is running out of battery. Using this device, we get to see the two main characters forming a common bond, as Hank recalls the first time meeting her, which builds to even more of a closeness between the two males.

What is infuriating about this film is that the writers/directors Daniel Kwan and Daniel Scheinert, take us on this strange journey of discovery, only to leave us in the final act with a finale that doesn’t explain anything and just baffles us even more. As if they didn’t have a clue what to do so they left it for us to work out. Already there are theories popping up across the internet.

The two leads, Paul Dano and Daniel Radcliffe, are extraordinary. Dano, possibly one of the finest actors working today, is terrific as Hank, this confused, lost soul who murmurs away while trying to find a connection with his own life. Radcliffe gives one of his finest performances as Manny, the dead body. Mostly used as a tool for comedy, he is both visually right for the part of a dead body as well as being hilarious himself. I salute Mr Radcliffe. It would have been very easy, after Harry Potter, for the star to just make more and more blockbusters but he chooses such interesting and diverse movies that just makes him better and better. 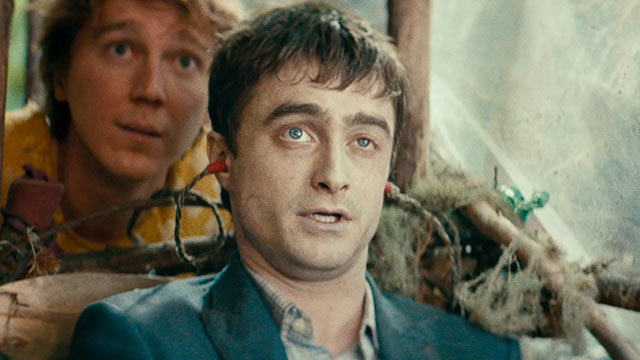 There are things I really liked about this film: the way the cast merge with the haunting and strange soundtrack; the connection between the two leads; the originality of the film as a whole. It’s a film full of interesting themes: loneliness, resilience, despair, friendship and wonderment about the world. All of this works well. What I can’t forgive the film is the ending, which has made me both confused and angry. A five-star film reduced to four stars thanks to the fact that it annoyed me.